Ashley Madison's new promo campaign argues that the only thing Hillary Clinton has done with her life is get cheated on.

As a former First Lady, United States Secretary of State, New York senator, the author of four books, and inspiration behind thousands of Tumblr memes, Hillary Clinton is perhaps one of the most terrifyingly accomplished people on the planet.

But according to the adultery website Ashley Madison, none of those other things matter nearly as much as the fact that Hillary Clinton is a wife—specifically, a wife whose husband put his penis in another women.

To drive this point home, the company just unveiled a new billboard in Chicago, featuring Clinton as their unofficial “spokesmodel.” MyFoxChicago reports that the billboard features an image of Clinton putting her finger to her lips with the tagline, “Harder choices…lead to Ashley Madison,” a play on the title of Clinton’s latest memoir, Hard Choices. 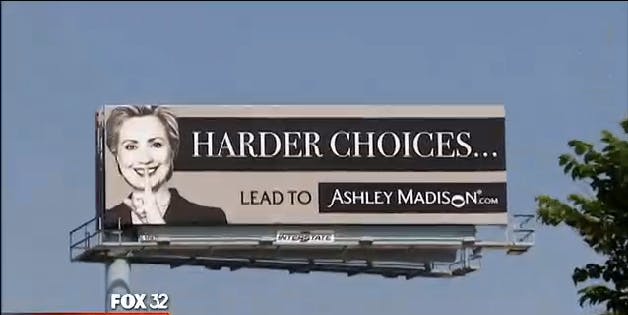 Aside from the fact that the slogan doesn’t even make that much sense—wouldn’t it make more sense for the unfaithful Clinton to be on the billboard, rather than his partner?—the billboard has left a bad taste in people’s mouths. “Hillary Clinton is an important person in our society and this really takes advantage of someone who doesn’t deserve it, and there’s something really shameful about what they’re up to,” a public relations firm CEO told MyFoxChicago about the billboard.

But Noel Biderman, the perpetually PR-hungry CEO of Ashley Madison, is arguing that the billboard is not intended to embarrass the former Secretary of State, or denigrate her many accomplishments. Rather, he wants it to jumpstart a national conversation about infidelity.

“This could be the first time a person sitting in the Oval Office has survived infidelity [from a partner’s affair] and has an understanding of infidelity,” Biderman told the Daily Mail. If elected, Clinton would have “an opportunity to speak from a unique perspective” about the issue, as opposed to energy policy or affordable health care or reproductive rights or any of the hundreds of pressing social and economic issues she could be using her platform to address.

So there you have it, folks. Even if she’s elected president, Hillary Clinton will now and forever be defined solely by her relationship with her husband and his errant penis. Because even if you’ve held the third highest ranking office in government and are the most powerful woman on the planet next to Oprah, people will never stop thinking of you as the lady whose husband cheated on you with that intern that time.