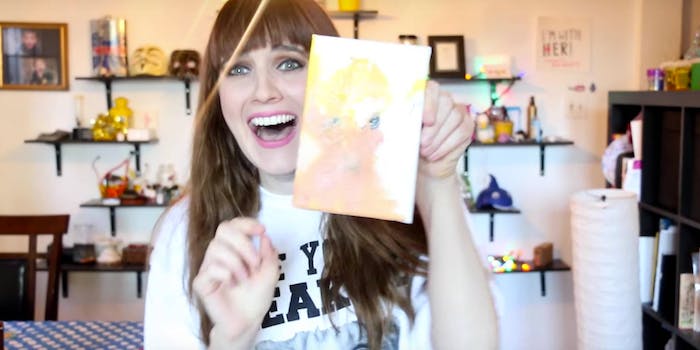 Can you see the resemblance?

The 2016 election is completely absurd. Accusations, leaked audio, and controversy after controversy have threatened to derail the Trump train. The Republican party can barely weather the shitstorm.

“This proves that Donald Trump running for president is so stupid that it inspires stupid acts—like painting him with your pussy,” says artist Aimee Davison, who did just that on YouTube.

Davison made painting news before by painting Trump with her breasts. But as Trump’s comments toward women have escalated, so have Davison’s materials. After strategically painting her nether regions in Trump colors (aka lots of orange), and making sure to get her anus in there to represent Trump’s mouth, Davison produces a beautiful, abstract work of art. It’s Rothko-esque in shape, and not unlike Kandinsky’s Blue Rider period in its almost autonomous use of color.

Davison’s pussy prints are available for auction until October 31, and 50 percent of the proceeds will go to ovarian cancer research. And we just hope she used non-toxic paint and took a quick shower, to avoid risk of yeast infection.