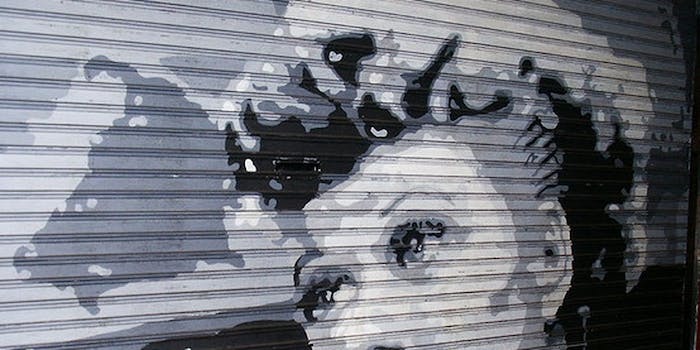 Because what 1950s sitcom isn't worth murdering for.

Since 2009, a bronze sculpture of actress Lucille Ball has stood in Celoron, N.Y.’s Lucille Ball Memorial Park, the heart of the late TV comedian’s quaint hometown. Since 2012, an anonymous citizen from neighboring Jamestown has campaigned for its removal on a Facebook page titled “We Love Lucy! Get Rid of this Statue.”

When the Buffalo News picked up the story a few days ago, the mainstream exposure turned the cause into a viral sensation. The Internet couldn’t pass up a chance to mock artist Dave Poulin’s questionable handiwork. Before long, he apologized, saying he had always been disappointed by the “unsettling sculpture” which was “not befitting of Lucy’s beauty or my ability as a sculptor.”

Poulin said that he first approached the mayor of Celoron five years ago about remodeling or replacing the statue and reiterated his willingness to do so at his own expense. But that hasn’t put an end to the barrage of “calls, texts and emails from all over the world”—nor, apparently, a few death threats.

Just spoke with the sculptor of the Lucy statue. He says he understands it's not his best work, he was never paid to do the sculpture

The sculpture was a gift, and he says Celeron could have removed it at any time.

Artist tells me he will do redo the statue for free, which could cost him up to $10,000 out-of-pocket. @WKBW

He also tells me the attention with this is unbelievable. He's received death threats @WKBW

Celoron Mayor Scott Schrecengost held a press conference on Tuesday morning to address plans to remodel the now-infamous statue, calling its rise to prominence on social media “unbelievable.” He said he was interested in commissioning a different artist to fix it, possibly just from the shoulders up, depending on available funds—and not at the taxpayers’ expense.

A bit from the presser. @WKBW pic.twitter.com/RJyzAPtqC0

Mayor says he will not use Taxpayer dollars to fund the project. @WKBW

Mayor: "We kept it up in remembrance of Lucy-ugly or not."@WKBW

The moral of this story is that, when the entire Internet unites to cyberbully a mediocre sculptor and a tiny hamlet because of a weird-looking statue that they’ll never have to look at in real life, it can bring about real and positive change.

Oh, and to the people who want to kill Poulin? Settle the heck down. Nobody loves Lucy that much.