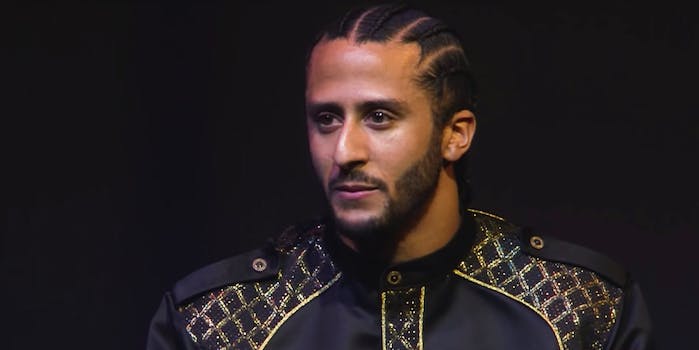 The sheriff in Union County, Arkansas, is denying that his office forced inmates to wear Nike T-shirts to taunt the brand and former NFL player Colin Kaepernick, CBS News reports.

Shaun King, a civil rights activist and prominent Twitter personality, shared a post on Wednesday with 18 photos of inmates wearing “Nike Athletics” shirts. King said they were forced to wear the branded clothing in response to Kaepernick’s divisive advertising deal with Nike.

“Source says it is to mock Nike and Colin Kaepernick,” King wrote. “Disgusting.”

The Sheriff in Union County, Arkansas is putting Nike t-shirts on people they arrest and making them wear them during mugshots.

Source says it is to mock Nike and Colin Kaepernick. Disgusting. pic.twitter.com/9z9Nw9hxuF

CBS reports that following King’s tweet, all mugshots were taken down from the website for the sheriff’s office. As of Thursday evening, no photos of inmates appeared on the site.

In a press release posted to Facebook on Thursday, Union County Sheriff Ricky Roberts said the shirts were given to people at the jail without “proper attire during the booking process.” He said the clothing was not meant to “demean or disparage those who are innocent until proven guilty.”

“We are not, and will not, be influenced by current political and social debates in the media,” Roberts said. “This shirt is not only in use now, but has also been for several months prior. We have taken steps to rectify this issue and insure that this will never happen again.”

Kaepernick’s decision to kneel during the national anthem before NFL games to protest police brutality against people of color sparked national controversy in 2016. Outrage over his protests escalated last month when he was revealed as the spokesperson for Nike’s #JustDoIt campaign. Calls to boycott Nike proliferated on social media even as the company’s stocks soared to record highs.