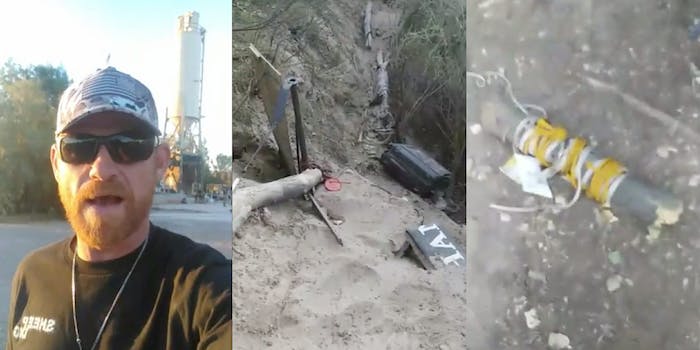 Officials say there's no evidence the site was used for human trafficking.

Michael Lewis Arthur Meyer, a former drug addict turned veterans advocate, on May 31 filmed a livestream on a Facebook page he runs showing what looked to be an abandoned campsite, BuzzFeed News reported Wednesday. Meyer claimed the site was a “child sex trafficking camp” and demanded the federal government investigate it.

“This is a child sex trafficking camp that no one wants to talk about, that no one wants to do nothing about,” he said, pointing out what he said was a “rape tree” (a tree with straps) and a prison cell for children (a hole dug into the ground underneath a canopy of netting and tree branches).

But after investigating the area, both Tucson police and U.S. Immigration and Customs Enforcement have said there is no evidence that the area could have been used for human trafficking. BuzzFeed News asserts the camp was formerly used by homeless people.

Despite the lack of evidence, right-wing outlets Infowars and the Gateway Pundit both promoted Meyers’ story. It has been folded into deeper conspiracy theories about child abuse, George Soros, and the Clinton Foundation. Online forums about Pizzagate and Q Anon have gone so far as to suggest “evidence” that the Tucson area is one piece of a global child abuse ring run by some of the world’s most powerful people.

Meanwhile, Meyers, who refuses to speak with the media, is continuing to post livestreams that serve as conspiracy theory fodder. His video on the camp has been viewed more than 700,000 times.

Read the full report over at BuzzFeed News.