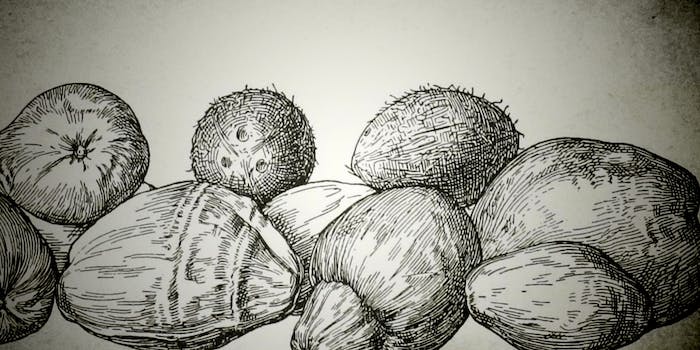 What do men have? COCONUTS.

Remember that scene in Glengarry Glen Ross where Alec Baldwin is talking about “brass balls” and how they’re a requirement for being a good salesman, with the subtext being that real men have balls, which all means men are brave and mighty and mean, etc.?

Yeah, well, a guy running for Congress decided to base his whole campaign on that idea, except instead of brass balls, it’s coconuts.

Elbert Lee Guillory is a Republican who served in the Louisiana State Senate, and is now running for Congress. He was originally elected as a Democrat, but in 2013 switched parties, explaining it was because he believes the welfare state is keeping black people in poverty, and using the (weak) argument that the Republican Party was the party of abolitionists in 1854.

OK, but back to coconuts. COCONUTS.

First, Guillory identifies that the objects he is dangling in his hand are indeed coconuts. Two of them. Like testicles. In a sac. But not in a sexist way. At least not when he clarifies that when any Louisianan has the courage to stand up and fight, it is said “she or he has coconuts.”

(Please note he is giving his speech to nobody. Just a man, talking about balls to an empty room.)

We then go into some long, artistically lit shots of coconuts, as Guillory claims there are not enough people in Washington with the coconuts to stand up to “foreign guests.” But not foreign guests like the coconut, whose natural habitat is Central America and parts of South America and Southeast Asia.

It’s cool, we get it. “To have balls” means to have courage. But such a correlation is also tying the possession of male anatomy to specific personality traits. To have the traits of a man means to be bold and uncompromising. And, yes, women can have balls (or coconuts), both in the anatomical sense and in the euphemistic sense, but centering a campaign speech solely around having coconuts is a fetishization of macho characteristics and the male anatomy.

Guillory is certainly not the first politician to do make such analogies. Donald Trump started arguing about his penis size in a debate, and Arnold Schwarzenegger used a catch phrase from his acting days to suggest Democrats were “girlie men” while running for governor of California.

However, such masculine posturing has deeper roots in our perceptions of gender. Traditionally, the feminine has been associated with everything from home care to general kindness to empathy, while the masculine is tied to procuring homes and meats and aggressive behavior.

And these divisions translate to their corresponding political spheres. “The American welfare state has had a feminine coloration from the very beginning,” wrote political commentator and “godfather of neo-conservatism” Irving Kristol. And in Masculinity, Femininity, and American Political Behavior, Monika L. McDermott argues that issues like welfare, healthcare, and education are considered feminine, while defense and foreign affairs are more masculine.

This is dangerous because if there’s one thing a politician should have, it’s not just the balls to go to war or to stand up to perceived enemies—it’s empathy. The job is to care about people, to listen to them, to sacrifice personal ideas in order to serve what the people want. And right now, all those things are coded as feminine—something anyone who crows about their “coconuts” probably does not want to be.