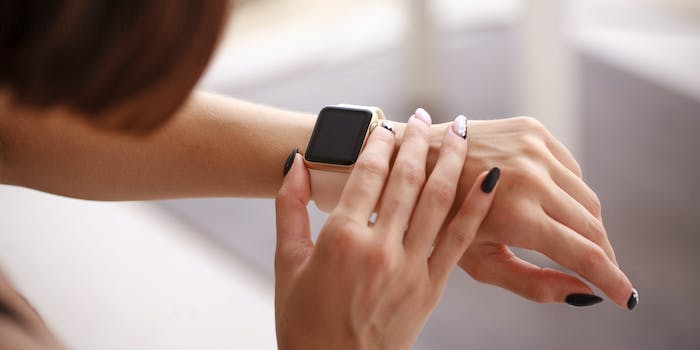 The Apple Watch tracks calories burned during sex. What does that mean for data privacy?

Does the Apple Watch track sex?

It’s no secret that Apple’s smartwatch is highly sensitive to users’ physical activity. The Apple Watch Activity app uses an accelerometer along with arm motion to track users’ movements, Apple notes, and its “Move” criteria purposefully records “walking slowly, pushing your wheelchair, and household chores.” As long as your active energy is above your resting energy, your movements get logged.

This also includes sexual activity. In a test run using a Hitachi Magic Wand in bed for 45 minutes, this reporter’s Activity app on the Apple Watch SE tracked 13 calories burned and incorrectly calculated 21 “steps” from the session. Calories burned during standard, vanilla sex are generally less intense than dedicated physical activity, but nonetheless, it may surprise some unsuspecting Apple Watch users that their sexual physical activity is getting logged into the Activity app.

Why it matters if Apple collects data on sexual activity

Cybersecurity operations manager Ema told the Daily Dot that they generally avoid using smartwatches “on principle” due to their biometric data-tracking features. Regardless, they believe Apple owes its customers far more transparency about how users’ data is recorded and used.

“Companies should be as explicit as possible when telling users what data they collect, especially health data and biometrics,” Ema said. “Like, this isn’t a medical devices company where you know what kind of device you’re using, this is a watch. If the watch is going to know when you’re having sex, you should be aware of that.”

Apple has proudly touted its strong data privacy record compared to its competitors like Facebook and Google. But Apple’s relationship with users’ data is still complicated. The Atlantic’s Ian Bogost criticized Apple last year for simultaneously supporting data privacy regulations while refusing to “keep privacy violators off its platforms and away from its customers.” The iOS App Store, for example, hosts Facebook and Messenger for download despite both apps’ notorious history harvesting user data.

“Safari, the web browser that comes with every iPhone, is set up by default to route web searches through Google. For this privilege, Google reportedly paid Apple $9 billion in 2018, and as much as $12 billion this year,” Bogost wrote. “All those searches help funnel out enormous volumes of data on Apple’s users, from which Google extracts huge profits.”

These same questions loom over the Apple Watch. In watchOS 2, Apple introduced the ability for third-party apps to interact with Activity data with the user’s permission. But that doesn’t mean users know where their data is headed once a third-party interacts with it. Ema drew parallels between the 2019 redditor’s heartbeat data and the cybersecurity manager’s own experiences navigating data regulations in the workplace, where access to personally identifiable information isn’t necessary to analyze patterns from users or obtain other forms of sensitive user information.

“I know this is health data and not passwords, but the fact that those conclusions [around sexual activity] can be drawn unfortunately means that some entity can probably capitalize on it,” Ema told the Daily Dot. “It’s essentially a data spigot.”

Granted, Apple lets users manually turn fitness tracking on and off in the iPhone’s Watch app, and when in doubt, users can always leave their watch on the bedstand during sexual activity. But Apple Watch Activity data may be collected and stored without the user fully cognizant of what’s being tracked and when. This is doubly true for less tech-savvy users, who may unknowingly send their sexual activity off to third-party apps without knowing how and where that information will be used.

“Any mobile device that tracks data and shares it with other applications should have a way to turn that off and isolate it,” Ema said. “More importantly, Apple has an obligation to its customers to better document the data it tracks and how much data the health API can actually give other apps.”

The Daily Dot reached out to Apple for comment.