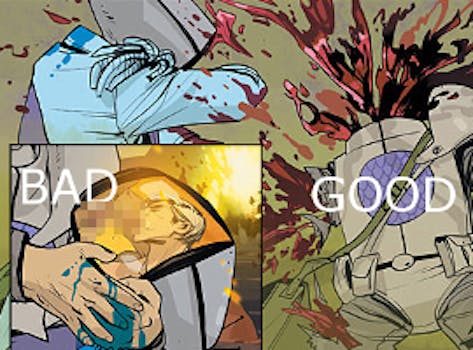 UPDATE: ComiXology has updated its website to clarify that they misinterpreted Apple’s content policy and will be releasing the issue of Saga. This is the statement from ComiXology CEO David Steinberger:

In the last 24 hours there has been a lot of chatter about Apple banning Saga #12 from our Comics App on the Apple App Store due to depictions of gay sex. This is simply not true, and we’d like to clarify.

As a partner of Apple, we have an obligation to respect its policies for apps and the books offered in apps.  Based on our understanding of those policies, we believed that Saga #12 could not be made available in our app, and so we did not release it today.

We did not interpret the content in question as involving any particular sexual orientation, and frankly that would have been a completely irrelevant consideration under any circumstance.

Given this, it should be clear that Apple did not reject Saga #12.

After hearing from Apple this morning, we can say that our interpretation of its policies was mistaken. You’ll be glad to know that Saga #12 will be available on our App Store app soon.

We apologize to Saga creator Brian K. Vaughan and Image Comics for any confusion this may have caused.

Our original story on the banned comic controvery is below.

Here’s what Apple thinks is acceptable content from Saga, Brian K. Vaughan’s acclaimed comic about a forbidden love between two aliens of different races: illustrated scenes of graphic violence, ample nudity, gore, child prostitution, and a close-up on the horrifying private parts of an alien giant.

Here’s what caused Apple to ban issue #12 of Saga, the long-awaited end of its second arc, from its download center: a tiny background image of gay sex.

Saga is hugely popular with hardcore comic fans, science-fiction fans, and critics alike. It was on numerous best-of lists at the end of last year. Vaughan is an acclaimed comics writer perhaps best known for creating Y: The Last Man, while artist Fiona Staples has drawn rave reviews for her work in Saga and other series like Gods and Monsters. This issue is the comics equivalent of a season finale: as Word of the Nerd put it in their review, “[I]t wouldn’t be right if [Vaughan] didn’t give us an arc ending that makes you want to cry out in frustration because the book won’t be back on the shelves for a few months.”

So you can guess that readers were shocked, annoyed, and then mad when Vaughan and Staples announced that Apple had banned the comic from its iOS app store—including the very popular Comixology digital comics app—due to inappropriate content.

“As has hopefully been clear from the first page of our first issue, SAGA is a series for the proverbial “mature reader,”” Vaughan stated in a note issued through Staples’ Tumblr.

Unfortunately, because of two postage stamp-sized images of gay sex, Apple is banning tomorrow’s SAGA #12 from being sold through any iOS apps. This is a drag, especially because our book has featured what I would consider much more graphic imagery in the past, but there you go. Fiona and I could always edit the images in question, but everything we put into the book is there to advance our story, not (just) to shock or titillate, so we’re not changing shit.

On the website of Image Comics, Saga’s publisher, Vaughan urged readers to download Saga #12 directly from Image’s own comics store, to buy a copy from their local comic store, and to support the Comic Book Legal Defense Fund, which works to fight against censorship.

It’s no secret that corporate retailers like Apple and Amazon have been stringent about the contents of their virtual bookshelves in the past. There was that time a “glitch” kept X-rated and queer content from displaying properly on Amazon’s search engines, and the numerous times that both Apple and Amazon have said no to manga and other graphic novels because of content deemed too explicit.

Apparently independently, comics download provider ComiXology put a “Graphic Content” warning on Saga for both its Apple and Android apps. ComiXology said it was unable to comment to comics news site BleedingCool on its decision.

Image is familiar with this brouhaha: in 2009 Apple banned issue #1 of Sex by Joe Casey and Peter Kowalski, also published through Image. The issue sold out anyway. And it looks like Saga, already tremendously popular, may actually benefit from the commotion.

“The best part about all this censorship nonsense regarding #Saga,” said Twitter user DoctorFrenchie, “is that even more people are going to read it now.”