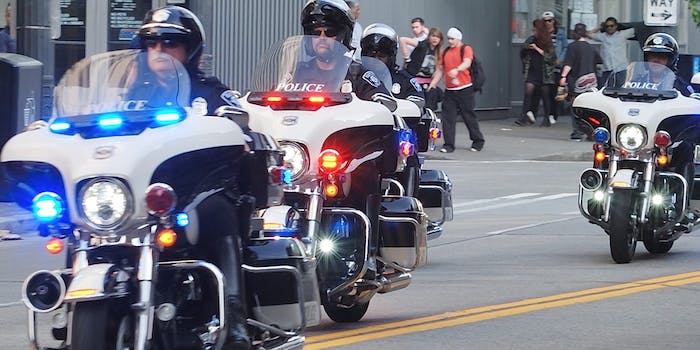 Cellphone cameras are powerful weapons. Could this change that?

Fit neatly into millions of pockets, the newly ubiquitous technology has deeply impacted how Americans talk about police.

From video of Eric Garner dying while in an NYPD choke hold to Walter Scott being shot in the back and killed, instant access to recording devices has put an intense spotlight on police behavior in the U.S.

Now, Apple has been granted a new patent that could allow governments to prevent the capturing of videos by remotely disabling an iPhone‘s recording feature with an infrared signal.

Ostensibly designed to prevent filming in places like concerts or classified facilities, the new tech could provide governments around the world the ability to shut down cellphone cameras without any apparent transparency.

Apple has not responded to a request for comment.

Cellphone video cameras have become iconic tools of protest around the globe. In the U.S., the technology’s prominent role in a new discussion about police brutality has led to invocations of God at their mention.

“[The police] used to be able to get away with lying about it,” Baltimore lawyer William Murphy, Jr., attorney to the family of Freddie Gray, said last year after Gray died in police custody. “And there were lots of people in the establishment anxious to believe them over anybody black. Thank God for cellphone video cameras. Thank God for cellphone video cameras, because now the truth is finally coming out. And it’s ugly.”

In 2014, cops tried to delete a video from the phone of Kianga Mwamba after she recorded police beating a handcuffed man, then arrested her and took her to jail. The video, deleted off the device by the officers, was backed up online, and caused her charges to be dropped. But the incident raises serious questions about whether police ought to have so much power over a device being used as a tool of transparency and, sometimes, accountability.

FBI Director James Comey said last month he believes a “viral video effect” may hurt U.S. police work and may be “at the heart” of the rise of violent crime in some American cities.

“There’s a perception that police are less likely to do the marginal additional policing that suppresses crime—the getting out of your car at 2 in the morning and saying to a group of guys, ‘Hey, what are you doing here?’” he told reporters at Federal Bureau of Investigation headquarters.

Comey provided no statistical proof linking cellphone video camera to crime rates and only singled out a few American cities but stayed silent on the majority of cities that experienced no uptick in crime.