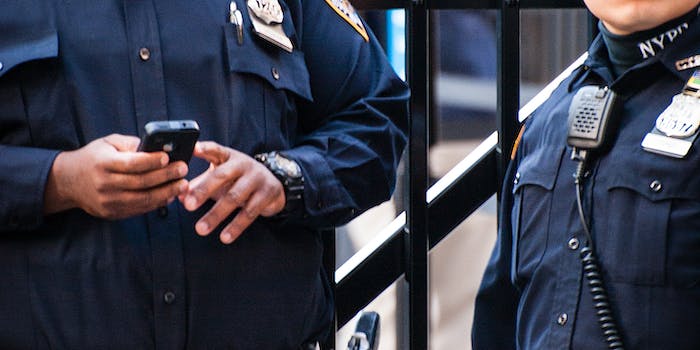 The tech company is currently battling the government in California and New York courts to avoid being forced to help investigators access two iPhones. A judge in New York sided with Apple and said it didn’t have to extract data from a drug suspect’s phone. But the case in San Bernardino, California, concerning the iPhone used by one of the perpetrators of last year’s mass shooting there, has become a focal point in the broader encryption debate.

“We know terrorist groups are communicating, and communicating about plots, over a lot of encrypted applications and now totally encrypted devices like the Apple iPhone, [which] cannot be penetrated even with a search warrant from a judge,” NYPD Deputy Commissioner John Miller said on John Catsimatidis’s Cats Roundtable. “Our ability to know what’s going on is increasingly getting harder to achieve.”

This claim—that encryption is stymying investigations—is part of a decades-old law-enforcement argument that in recent years regained strength under the name “going dark.” FBI Director James Comey and other officials have made the same claim many times, including in testimony before Congress last week about the San Bernardino case.

But Miller took the argument against encrypted communications further. “You are actually providing aid to the kidnappers, robbers, and murderers,” he said of Apple, “who have actually been recorded on the telephones in Riker’s Island telling their compatriots on the outside, ‘You gotta get iOS 8. It’s a gift from God’—that’s a quote—‘because the cops can’t crack it.’”

Miller’s remark stood in stark contrast to what Comey told Congress last week, when he attempted to avoid sounding like he was accusing Apple of acting in bad faith or having impure motives.

During a House Judiciary Committee hearing, Rep. Hakeem Jeffries (D-N.Y.) asked him whether the Justice Department had questioned Apple’s motives. Comey responded that he saw a marketing element in the company’s actions but hastily added that that was “not an illegitimate motive.”

When Jeffries pressed Comey to weigh in on remarks by New York City Police Commissioner William Bratton—Miller’s boss—accusing Apple of “corporate irresponsibility,” the FBI director dodged, saying, “I’m not going to characterize it that way.”

But long before the San Bernardino case brought mainstream attention to encryption, Comey accused Apple of acting improperly on numerous occasions. In a briefing with reporters in September 2014, a few days after Apple added unbreakable encryption to iOS 8, Comey said, “What concerns me about this is companies marketing something expressly to allow people to place themselves beyond the law.”

During a major speech on the topic in October 2014, Comey urged tech companies “to take a step back, to pause, and to consider changing course.”

As they press their case that encrypted devices are preventing them from doing their jobs, law-enforcement officials like Comey must walk a tightrope between advocating against warrant-proof encryption and demonizing the features that protect everyday Americans’ online activities.

While polls don’t suggest that Americans are militantly opposed to police being able to bypass encryption, Edward Snowden‘s leaks drained people’s confidence in U.S. surveillance and counterterrorism policies and imbued many subsequent discussions, including the encryption fight, with unmistakable tension.

Law-enforcement and intelligence officials like Comey want tech companies to design their encryption so that they can bypass it if officials bring them a warrant. Tech companies, security experts, and privacy groups reject this notion, warning that so-called “backdoors” would undermine encryption and create new avenues for theft and exploitation.

Apple is not being asked to redesign its existing encryption to help the FBI unlock the San Bernardino shooter’s iPhone, but rather to write custom code that would let the bureau flood the device with password guesses. The company objects on the grounds that complying would set a precedent leading to more intrusive and dangerous demands for technical assistance.

The full Cats Roundtable show is available below. Miller’s initial comments about encryption are at 7:53, and he continues discussing it at 15:48.