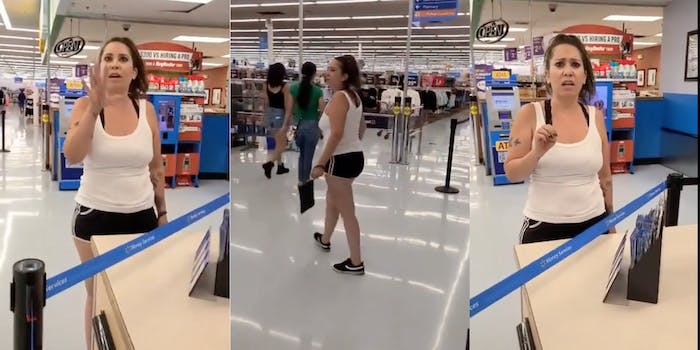 ‘I’ve never met a Karen before, so I’m excited’: Anti-masker gets embarrassed after realizing she’s being filmed at Walmart

The woman, who appears to realize how she'll look once the video makes its way online, appears to become contemplative and momentarily silent.

An anti-mask woman became embarrassed this week after realizing she was being filmed and being referred to as a “Karen.”

In footage posted to Reddit, the woman can be seen arguing with staff at a Walmart over the store’s mask policy.

The individual filming interjects to claim that the store could be shut down if it allows customers to remain maskless.

The woman, unsure why the individual has weighed in on the matter, pushes back in response.

The woman quickly realizes why she’s being filmed after the individual with the camera excitedly notes that it is her first encounter ever with a Karen.

“I’ve never met a Karen before, so I’m excited,” she says. “I can’t wait to put this on Twitter.”

The woman, who appears to realize how she’ll look once the video makes its way online, appears to become contemplative and momentarily silent.

The Karen eventually shoots back by criticizing the hair of the person filming.

The woman then focuses her attention back on the Walmart employee but appears to accept the fact that her continued protest will only make her look worse.

The woman begins to walk away as the individual filming refers to her as a Karen two more times.

“Fuck you,” the maskless woman says in response.

Users on Reddit, where the video was viewed thousands of times, debated the encounter and argued over who was in the wrong.

While most defended the woman filming, others argued that she was just as much of a Karen as the woman on camera.

More than anything, the video shows that even one year into the pandemic, anti-mask Karens continue to thrive.