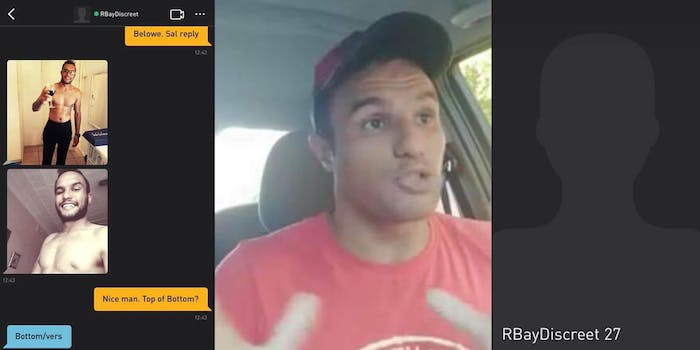 Homophobic extremist accused of looking for sex on Grindr

Christiaan Otto owns a gold mine in South Africa.

Otto, who manages a gold mine, has been vocal against the gay community online. He most recently said on social media that “homosexuality is 110 percent a sin” and that the COVID-19 pandemic was punishment for the community.

But the group “Expose Christiaan Otto” Facebook group is calling him a hypocrite.

According to the group, an account without a photo with the headline “RBay Discreet” was looking for someone to hook up with. The user identified themselves as “bottom/verse.” Otto lives in Richards Bay, South Africa, with his wife.

He has since denied ever having a Grindr account. Last week, he told South African LGBTQ publication MambaOnline that, “All they are doing is creating falsehood against me.” He continued, “They just took old photos off of my Facebook account and they created this profile. It’s not rocket science. I thought Grindr was something that you cut metal with.”

Otto also said the user behind the account will “burn in hell.”

But the group responded with more screenshots, this time alleging to show WhatsApp messages between Otto and the Grindr user. Group members said the screenshots are “conclusive information that the Grindr messages are legitimate.”

The messages are written in the Afrikaans language of South Africa and appeared to include a shirtless selfie of Otto. One message reportedly reads, “I thought I could trust you dude. You say you deleted the Grindr chats. What are you trying to do? Delete and block me!”

Otto has previously made many homophobic remarks on social media. In one post, he wrote, “God created marriage to be between a man and a woman. I don’t care how you feel about it, only God defines marriage – not you!”

He also said in a different social media post that people who have premarital sex won’t get into heaven.

A caucus of the Democratic Alliance, a political party in South Africa, recently filed a complaint against Otto after his post saying COVID-19 is “God’s judgment.”

One of the party’s members, Kade Guerreiro, said in a statement, “Otto’s remarks are shamelessly inflammatory and homophobic, and are particularly dangerous at a time when, in addition to the monumental battle against discrimination and social abuse, the LGBTIQ community stands with the rest of our country, as we face a distressing and uncertain battle against the Covid-19 pandemic.”