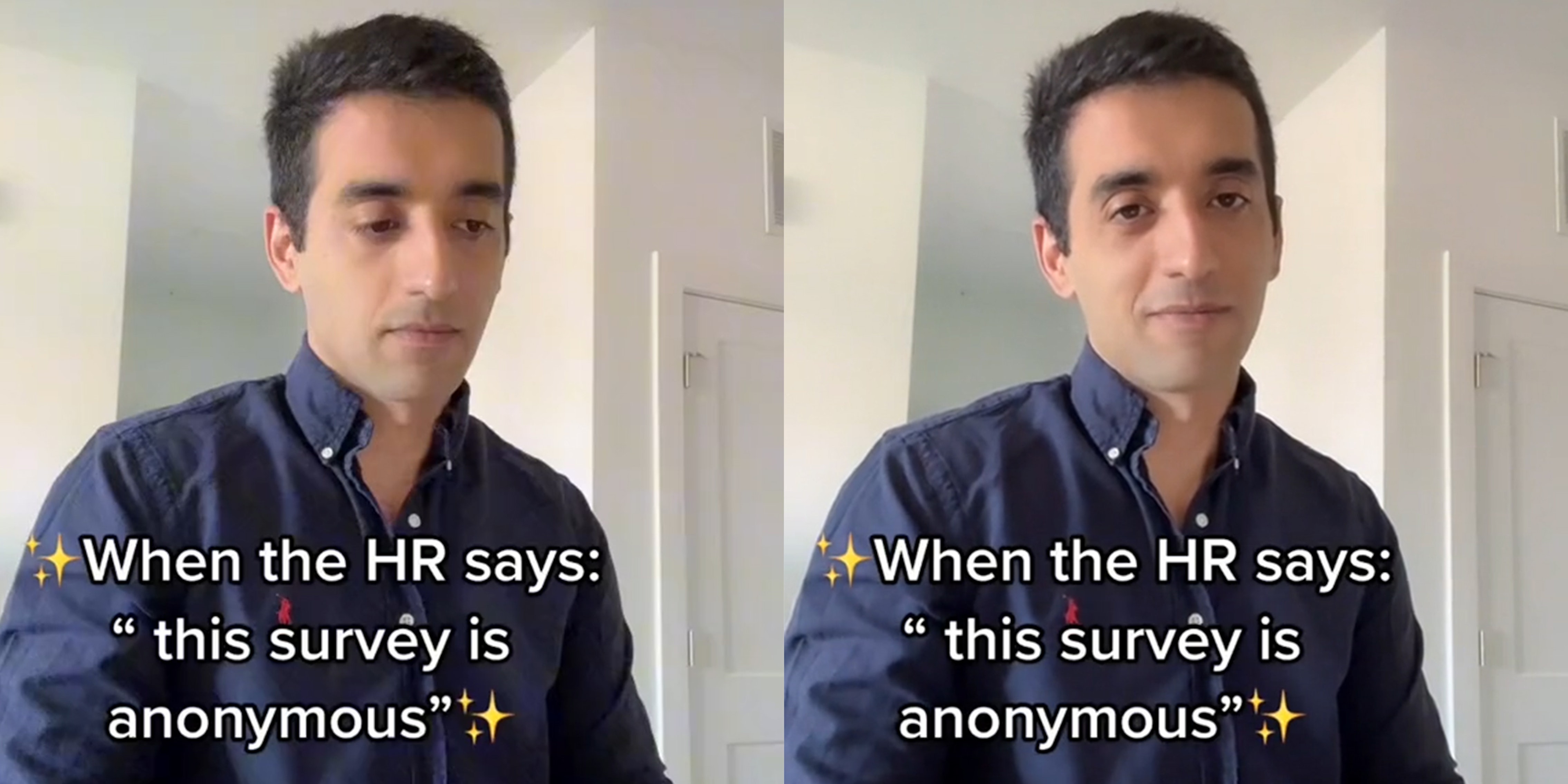 ‘Lesson 1: never trust HR to be on your side’: Worker’s video about ‘anonymous’ employee surveys sparks debate

In a week that saw another TikTok go viral on the topic, a second video with a similar sentiment has spread like wildfire across the platform, amassing over 2.1 million views and sparking discussion in the process.

In the video posted by user Elyas (@elyasjazayeri), the TikToker is typing on a computer while the overlay text reads: “When the HR says: ‘this survey is anonymous.’” After a beat, he lip-syncs to the background music, which says, “This bitch think I’m stupid.”

Viewers in the comments section took aim at human resource officers. “Lesson 1: never trust HR to be on your side,” one user wrote.

“Biggest lesson for those that don’t know: HR is NOT your friend,” a second said.

“‘You can trust us’ -an incredibly untrustworthy HR person,” a third quipped.

Others questioned how these surveys could be anonymous at all given the questions asked.

“And yet they happen to know when you didnt fill it out…lol,” another chimed in.

Others offered their own histories with so-called “anonymous” surveys.

“People at my old job went savage in them,” a user recalled. “‘Have the ceo ever taken dance lessons, since he always just dance around the question than replying.’”

“I once completed an ‘anonymous’ survey, a few weeks later they reach out to me by slack asking me to ‘clarify some points,’” a TikToker wrote. “Never trusted them again.”

“This is how I got fired,” another alleged.

Finally, some users noted that employees should be careful when looking at the exact language surrounding a survey. “‘The survey is confidential’ does not equal anonymous…” one said.

In a TikTok message to Daily Dot, Elyas elaborated on the inspiration behind the video.

“I actually saw a video very similar to the one I created and I had previous anonymous survey that it was asking very specific questions in a way that it was obvious it was coming from me,” he revealed.

He also said he hopes people will learn something from the video.

“First, I think it needs to be seen as a funny piece, but also it conveys the message that in the eye of employees, these surveys are not a place for you to say everything you feel about your workplace as it might have consequences for you,” he wrote. “In conclusion, I believe these surveys can be better structured so everyone can say whatever they feel, which can be painful for the employer in the short term, but it has significant value in the long run.”