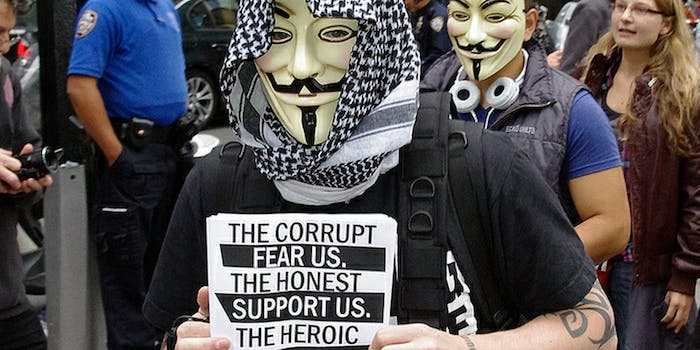 The hacktivist collective posted exposed more than 100 alleged pedophiles on Twitter and garnered political support for the move.

The group is using the hashtag #TwitterPedoRing to expose more than 100 alleged pedophiles using the microblogging site to locate, look at, and indecently communicate with minors and certain Twitter accounts that exist for the purpose of publicizing crude photos of children.

Those accounts have been posted to a Pastebin document that Anonymous plans to maintain until Twitter and law enforcement agencies take the necessary steps to “catch and stop these scumbags.”

“This is a list of pedophiles that twitter hasn’t deemed important to remove despite their affiliations with each other, their posting of children participating in lewd acts, and their requests for this sort of material,” the document notes in the header text.

Some of the alleged violators have continued with their pedophiliac ways despite the fact that the Anonymous community has made its intentions clear.

One user in particular, @GrandeDelNorte, has posted nine different messages that could be construed as illegal or in violation of Twitter’s child pornography policy, since he was named to Anonymous’s Twitter Pedophile Ring Monday morning. Among the violations, @GrandeDelNorte has retweeted four different pictures of underage girls, commented on one user’s body, and engaged in conversation with another.

Twitter maintains that it will report promoters of child pornography to the National Center for Missing and Exploited Children and permanently suspend any accounts containing updates with links to child pornography. The site has since made good on the second half of that policy; many of the accounts listed on Anonymous’s Pastebin document have since been suspended.

The conversation extended into the political realm this morning when Rhode Island State Representative Dan Gordon retweeted a tweet from @AnonNCarolina2 that linked to the AnonSource news report on the subject. (The account is not verified. The Daily Dot has reached out to Gordon for comment.)

“I have just spoken w/ the RI State Police Computer Crimes Division re: #TwitterPedoRing I need the latest list & any d0x to fwd to them,” Gordon tweeted shortly thereafter.

Gordon now appears committed to bringing an end to pedophiliac activity on Twitter, tweeting that he will testify that in a court of law to what he saw from certain violating account holders that Anonymous has named.

“TYVM #Anonymous & all for all of ur hard work in tracking dwn those that would harm kids,” he tweeted.

For Anonymous, such online policing comes all in a day’s work.

“More than a pleasure for us to serve you,” @RD_Anonymous wrote to Gordon in response.