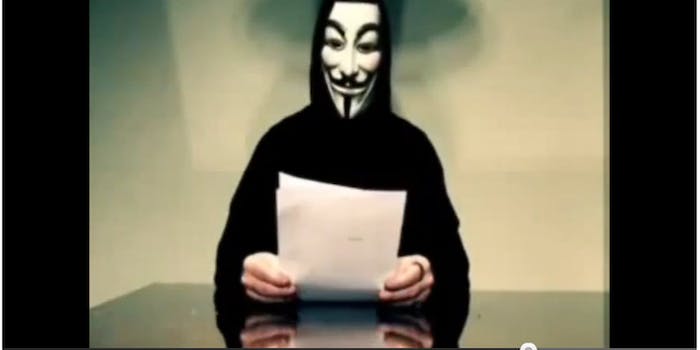 As drug cartels start to target hackers, Anonymous is striking back.

Anonymous, the loose-knit, global hacker collective, released a video this month demanding that Los Zetas, a violent Mexican drug cartel, release one of its members who was kidnapped during a street-level protest in Veracruz, according to global intelligence agency Stratfor.

In the video, a masked man who claims to be a member of Anonymous says the group will release information about journalists, police officers, taxi drivers and politicians that have cooperated with Mexico’s hyperviolent drug cartels if the member is not returned safely.

Stratfor said if Anonymous carries out its threat, “it will almost certainly lead to the death of individuals named as cartel associates,” even if the information is inaccurate, as rival cartels will likely target those people.

“This keeps getting more surreal,” Gilberto Leon tweeted in response to an article about the Stratfor report in the Mexican newspaper El Universal.

Anonymous appears to have removed the video referenced by Stratfor and the article in El Universal.

Last month Anonymous took down the website of the Veracruz state government to protest the murders of at least three people by the cartels who were reportedly killed after posting information on social networks and blogs.

Anonymous has continued to argue that government officials are often complicit with the gangs, which move cocaine from South America through Mexico and into the United States.

The cartels have targeted journalists that cover them, which have forced many journalists to stop covering the cartels. That has prompted many people to turn to social media to share information about the cartels’ activities. In the latest twist, Stratfor warned in its report that the gangs may now also start targeting hackers affiliated with Anonymous for execution.

More than 40,000 people—including 80 journalists—have been killed in Mexico’s drug war since 2005. But the September killings marked the first time the cartels claimed to have killed someone specifically for posting information online.

Stratfor said taxi drivers, who are often forced to work as lookouts for the drug gangs, would be particularly vulnerable for retribution if Anonymous releases the names of people it believes are working for the cartels.

“Whether voluntary or not, cooperating with criminal cartels in Mexico comes with the danger of retribution from rival cartels,” the report said.