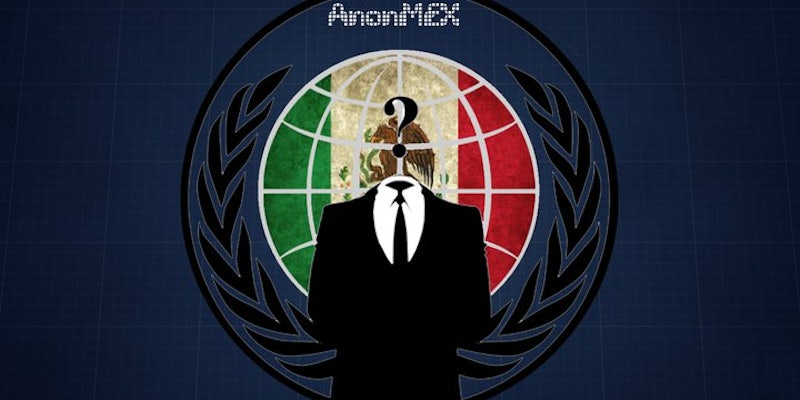 In response to drug murders, a hacker collective takes down a government website in a region plagued by drug violence.

Members of the hacker group Anonymous responded to the murders of three Mexicans purportedly killed by drug cartels for information they posted on social networking sites.

On Monday afternoon, the group launched a denial-of-service attack against the official site of the government of the Mexican state of Veracruz.

Denial-of-service attacks seek to render websites and other Internet services unreachable by bombarding them with incoming traffic which is often hard to distinguish from a high volume of regular usage.

The call to action was posted earlier Monday afternoon on the group’s Mexican Facebook page and on Twitter. The message, translated from Spanish, matched Anonymous’s English-language slogan:  “We are legion. We do not forget. We do not forgive. Expect us.” It appeared to refer to the recent killings in Nuevo Laredo, a city on Mexico’s northern border.

The attack was successful. Within 20 minutes after its start at 3:55 Eastern Time, the government website was offline.

The messages did not make it clear why they were targeting the Veracruz government. But corruption of local governments by drug traffickers has long been a problem in Mexico’s drug war.

On Saturday, a woman was found decapitated in Nuevo Laredo, near the Texas border, with a note saying she had been killed for messages she posted on social networks aimed at criticizing the hyper-violent drug cartels. That came less than two weeks after the bodies of a man and a woman were found strung from a pedestrian bridge in Nuevo Laredo with similar notes.

All of the signs were signed Z, an apparent reference to Zetas, one of the main drug-running cartels.

Other messages posted on the Anonymous Facebook page made direct reference to Javier Duarte, the governor of Veracruz. “Javier Duarte. Expect us!” Anonymous posted.

Duarte was elected earlier this year, taking over a state that had been left to the control of the Zetas by his predecessor, Fidel Herrera. The Mexican press has speculated that Duarte’s election campaign was partially financed by the Zetas.