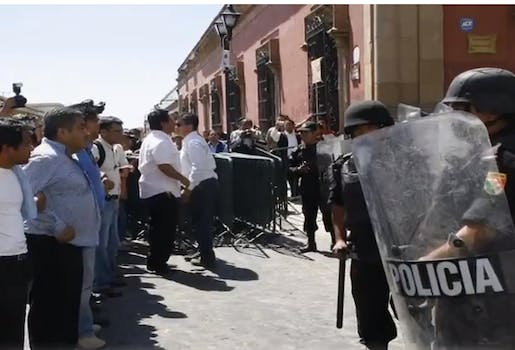 ¡Viva Anonymous! The hacker gang is back in Mexico

A new video declares war on drug-fueled corruption in Mexico.

Anonymous promised a “ruthless attack” on the Mexican government in a video released Tuesday, but some observers worry the movement is crying wolf.

The video announces a new campaign against corruption in Mexico, #OpCorrupcion. It calls on hackers to attack Mexican government websites and leak emails and documents, and contains brutally graphic images of people killed by Mexico’s drug cartels, whose violent struggle with each other and with the country’s police and military has claimed more than 43,000 lives in the past five years.

“Therefore, we appeal to all the world’s Anons, the entire global hacker community, to set aside our differences, and to ruthlessly attack all government agencies in Mexico: their web presence, their email, their servers. To bring to light all the hidden information that demonstrates that Mexico is corrupt,” the group said in the video. “We officially declare war against corruption in Mexico.”

Last week Anonymous called off #OpCartel, an operation that targeted Los Zetas, one of the most violent and powerful cartels in Mexico.

But the new operation has many similar elements to #OpCartel. Anonymous is promising to release 25,000 Mexican government emails that it says may show ties between officials and the cartels. That’s the same number of emails the group had promised to release in #OpCartel. The only real difference appears to be the target.

“#OpCartel is now #OpCorrupcion Don’t you wish you had paid attention in Spanish classes?” Alida Cornelius posted on Twitter.

Anonymous said it called off #OpCartel because Los Zetas released a kidnapped Anonymous member. But the group has yet to identify the kidnapping victim, leading some to speculate it was a hoax.

“I strongly doubt the kidnapping took place,” said Leland Benton, the chief forensics investigator for ForensicsNation, which tracks hackers and groups like Anonymous. “The cartels are not afraid of Anonymous.”