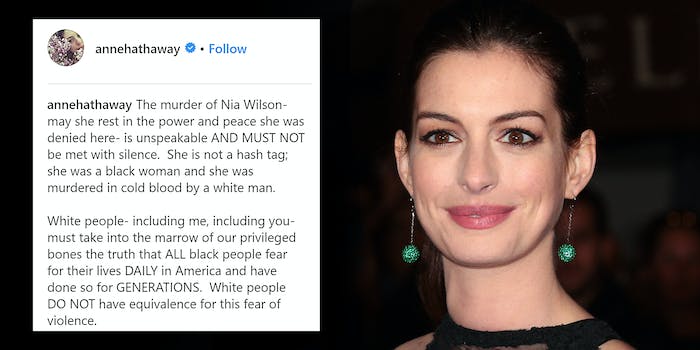 ‘We must ask our (white)selves- how ‘decent’ are we really?’

Celebrities are publicly reflecting on white privilege and violence against women of color in the wake of 18-year-old Nia Wilson’s senseless killing.

People were shocked by the attack on Wilson, and assault of her 26-year-old sister Lahtifa Wilson, Sunday night at a Bay Area Rapid Transit (BART) station platform. A 27-year-old suspect, John Lee Cowell, has been booked with murder. The attack has been characterized as unprovoked and random, but many are wondering about the racial elements at play.

Media coverage of Wilson’s death has been disrespectful at times to the victim’s memory, negatively characterizing her. In the wake of the tragedy and public response, Anne Hathaway spoke out on Instagram, using her platform and privilege as a white celebrity to bring attention to Wilson’s death.

“The murder of Nia Wilson—may she rest in the power and peace she was denied here- is unspeakable AND MUST NOT be met with silence,” Hathaway wrote in her Instagram post.

The murder of Nia Wilson- may she rest in the power and peace she was denied here- is unspeakable AND MUST NOT be met with silence.  She is not a hash tag; she was a black woman and she was murdered in cold blood by a white man. White people- including me, including you- must take into the marrow of our privileged bones the truth that ALL black people fear for their lives DAILY in America and have done so for GENERATIONS.  White people DO NOT have equivalence for this fear of violence. Given those givens, we must ask our (white)selves- how “decent” are we really?  Not in our intent, but in our actions?  In our lack of action? Peace and prayers and JUSTICE for Nia and the Wilson family xx Note: the comments for this post are closed. #blacklivesmatter #antiracist #noexcuse #sayhername #earntherighttosayhername

Hathaway didn’t just bring attention to Wilson’s death, but also turned a mirror to society, saying, “ALL black people fear for their lives DAILY in America and have done so for GENERATIONS.  White people DO NOT have equivalence for this fear of violence.”

Other celebrities such as Sophia Bush, Bevy Smith, and Tracee Ellis Ross have spoken up about the killing and explicitly called out racism. “Nia Wilson was murdered by a white supremacist on parole,” Bush wrote in her Instagram post.

@RWitherspoon & #annehathaway saying #NiaWilson name puts this heinous racist murder in front of many people who would prefer to ignore it! I applaud them for using their platform

Say her name. #NiaWilson She was 18. Heading home from a family gathering with her sister. Standing on an #Oakland train platform. She could’ve been you. She could’ve been me. She is us. Violence against women is a societal issue that is all of ours. And violence against women of color needs to be called out by ALL of us. Nia Wilson was murdered by a white supremacist on parole. John Lee Cowell. A man who singled out two women of color & slashed their throats in a stabbing that BART Police Chief Carlos Rojas deemed a “prison-style attack” that was among “the most vicious” he had ever seen in 30 years of policing. Her sister Letifah survived, cradling Nia in her arms & says she looked back at Cowell & “he was wiping off his knife & stood at the stairs. Just looked … he just stood there, like it was nothing.” The next day he was apprehended on another Oakland train, when a woman saw him standing over another #WOC, hand reaching into his pocket. The police apprehended him today without incident. Which I must be honest, strikes me… We’ve all seen videos of unarmed black men being tased for simply sitting on the sidewalk, or being thrown violently onto the hoods of cop cars over traffic violations. Yet this man, this racist criminal intimidating riders on a passenger train a day after murdering a teenage girl & attempting to murder her sister, is gingerly handcuffed & spoken to in soft worlds? The double standard must end. The silence around the death of women of color must end. And WHILE we’re at it, the behavior of news media that attempts to tarnish a victim after her untimely death must end. Running a photo of Nia smiling with a handgun on the news? (Which UPDATE was a freaking rubber cell phone case!! TF!?) Rather than an image of her from her recent high school graduation? I own a gun. I own a few. If I were murdered by a senseless maniac & my family was robbed of me, do you for ONE MINUTE think the news would run photos of me at the shooting range first & foremost? No. They would not. I’d be pictured on a red carpet or holding a puppy. That shit has to stop too. Sisters. This is our fight. All of us. Say her name. Stand for her.

People are thanking celebrities for bringing attention to Wilson and white privilege, and for keeping the conversation about violence against women of color at the front of the public consciousness.

Yessss Anne Hathaway with the solidarity post. Being black in America invokes some fear. However, I only fear God. She understands and gets it, we need more solidarity white people in actions, not silence. I've experienced the silence too many times. Speak up! #NiaWilson

Hathaway also used her post to request that white people examine their privilege and internalized racism, saying, “We must ask our (white)selves- how ‘decent’ are we really? Not in our intent, but in our actions? In our lack of action?”