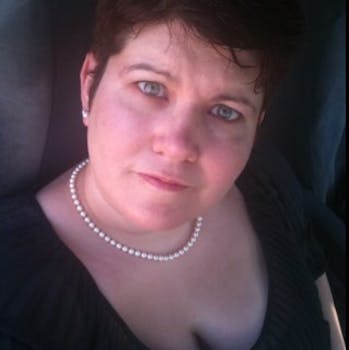 What's the fastest way to get a murder trial suspended? Try tweeting a photo of the jury.

For the second time in four months a trial was derailed because of someone tweeting during a proceeding.

Only this time, it was a reporter who messed things up.

On Wednesday the judge called a mistrial after discovering that Bush, who writes for the Topeka Capital-Journal, tweeted a photo of the jury (below).

Capital-Journal publisher Gregg Ireland said that Bush was aware of the rules and was “miserable about” the whole ordeal, according to Fox News.

The 14 year veteran reporter tweeted at least five different photos from inside the courtroom. Most of her photos show the court clerk, the judge, and some witnesses. One photo of Tabor and his attorney seems to show the jurors sitting in the background.

Bush has not tweeted in the last seven hours.

A cousin of 20-year-old Matthew Mitchell, the man who was killed, was disappointed in the mistrial but understood why it was done.

“I’ve been waiting for this day about two years,” Houston James told the Capital-Journal. “It was going smoothly. It was going straight smoothly until today.”

About four months ago an Arkansas murder trial was suspended after a juror was caught tweeting about the proceedings.