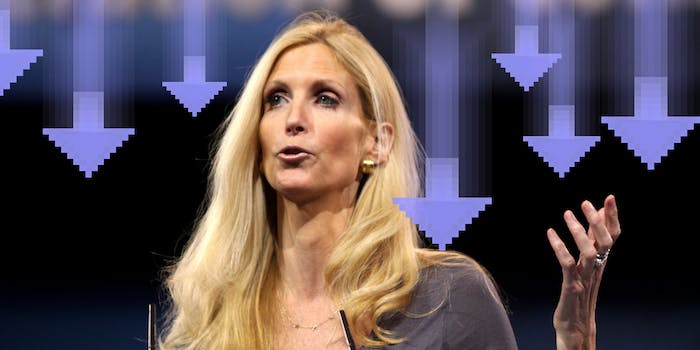 Was this the least popular celebrity AMA in Reddit history?

Redditors aren't a particularly conservative bunch, and Coulter knew how to push their buttons.

It’s telling that, when outspoken conservative columnist and political personality Ann Coulter came to Reddit, so many users downvoted her that you can no longer find her 4,000-comment thread by browsing. You have to manually search for it.

Reddit has a natural aversion to trolls, and Coulter can clearly troll with the best of them. On Twitter alone, she’s called for parents to disown their gay children, referred to President Barack Obama as a “retard,”  and called Thanksgiving “Holocaust on your plate day.”

This time, she started with a tweet, posted Monday before her Reddit Ask Me Anything session even began:

Coulter’s was possibly the most unpopular AMA of all time.

To downvote a major celebrity’s post to such an extent is likely unprecedented, at least since Woody Harrelson’s infamous “Rampart” AMA set the standard for disappointing Q&A sessions. Coulter’s attempt couldn’t have been helped by the fact that she had problems with the login process, and posted her responses to users under a different screen name than the one she created the thread with.

One has to scroll down to the seventh most popular question before finding Coulter’s first answer. The question was how she reconciles her Christian faith with her political opposition to government health care and the right for gays to marry. Her response, which began “FIRST QUESTION IS ANSWERED IN MY NEW BOOK, ‘NEVER TRUST A LIBERAL OVER 3’!” was downvoted by more than 700 people.

Next, someone from outside the U.S. asked, “Why do you chose such a adversarial and offensive approach, often to the point of purposefully insulting people, rather than favouring more civilized discourse?”

“[M]y question for you is why to you choose such an adversarial and offensive approach in asking questions, to the point of purposely insulting people, rather than more civilized discourse,” Coulter responded. More than 1,200 people downvoted that one.

Only two of Coulter’s 39 answers actually had more upvotes than downvotes. In one, she said she used to defend men falsely accused of rape in civil suits (an issue Reddit’s many men’s rights advocates rally around). In the other, she mentioned how much she likes beagles, although she doesn’t own any at the moment.

“I think you actually might have Reddit figured out and you’re just sort of f*cking with everyone,” one commenter wrote to Coulter.

“‘Witty’ replies. Men’s Right Issues. Random insults. By jove, i think you’ve got it!” another added.

By the time the smoke cleared, very little had actually been said, and it wasn’t clear who’d been trolled and who’d done the trolling.