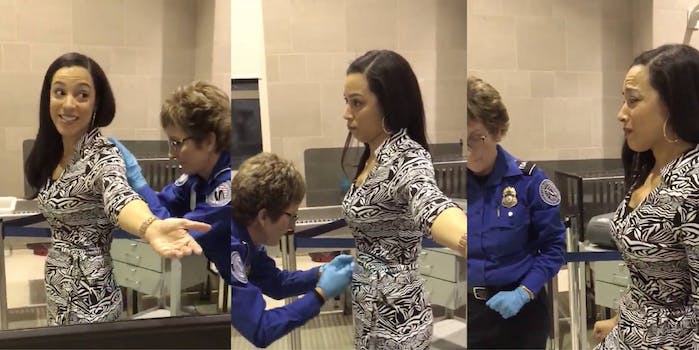 'Things don't change unless we ask questions and demand answers.'

Anyone who’s flown before probably has had their own qualms with the Transportation Security Administration. But one frequent flier wants to make sure her TSA experience never happens to anyone again.

On Thursday night, CNN political commentator Angela Rye posted a series of videos on Twitter about the TSA pat-down she had just received at the Detroit Metropolitan Airport. The first video was a Periscope livestream explaining the gist of the incident, and the second video is of the search, which Rye requested be recorded by a police officer.

“I was just thoroughly traumatized by the TSA,” she says in the Periscope live stream. “…Apparently the TSA grabs vaginas like Donald Trump.”

In Rye’s second video, she’s patted down by a TSA agent in public while the officer films. After the agent performed the search and visibly touched Rye’s vaginal area at least once, the video ends with Rye crying.

I asked the police officer to film this so I can send to @TSA. I'm hoping my humiliation will fix the system. #TSAVaginaMonologues pic.twitter.com/lypkkcpZCW

In a CNN opinion piece Rye published on Friday, she detailed exactly what happened to lead to that encounter. Rye explained that she has the TSA PreCheck and a CLEAR membership, but she happened to be randomly selected for additional screening that night.

After being scanned through the backscatter X-ray machine, her right UGG boot, an area on her back, and three areas near her vagina were flagged.

“I didn’t care about anything but one place on my body. I said in complete disbelief: ‘You know you aren’t patting down my vagina, right? Like that’s NOT happening,'” Rye wrote in the piece.

She told the TSA agent, a woman, and the agent’s supervisor that she had a background in Homeland Security and knew her rights and that she would rather just go through the scanner again. But instead, the supervisor called over his manager, who told her she could either take the pat-down or be escorted out, missing her flight to New York.

The agent insisted that she would just perform a backhanded pat-down around the upper thighs, but Rye continued to protest. The manager then called for police. The officer, however, understood Rye’s concerns and even recorded the pat-down on her phone.

While we can see what’s happening on the video, Rye’s own detailing of the incident is even more devastating.

The pat-down began and was uneventful until she went down my leg, up my dress, and her hand sideways hits me right in the crack of my labia. Startled, I jump and feel a lump in my throat trying to hold back tears. What happened to the back handed pat-down?

She comes around to the front; I grow nervous and pull back a bit, afraid of the same thing happening—and her sideways hand hits in the middle of my genitals again. I can no longer hold back the tears. The officer drops the phone to his waist. He tells me he is going to write up an incident report.

Rye is far from the first person who has felt violated by the TSA. While Rye shared her video and answered plenty of questions and comments on Twitter, other users came forward with TSA pat-down horror stories of their own.

Recently noticed that wearing a pad will always trigger the body scan censor causing a crotch pat down. @angela_rye #TSAVaginaMonologues

I'm so sorry- this happened to me in May because I carried my 1 year old through the metal detector. Cried for hours after

I was almost escorted out of DFW because I initially refused this.They called Troopers on me & said I had no choice ❤️ so sorry. Humiliating https://t.co/fXr19NmpV4

@ShernetJames Got groped by female TSA; I was in wheelchair; still had to go thru machine and then groped! UGLY!!

@TheREALStanP sorry guys but this is nothing new. My boobs are large so tsa officer has to get between n underneath them Not fun

This same thing happened to me at BWI. The TSA woman put her hands into the front and back of my underwear #TSAVaginaMonologues https://t.co/nTCfcG0Il7

I was searched twice by TSA. The firt time I was 12. The second time I was 21. I felt violated both times. 😒

And when I was 12 it was a man TSA officer that searched me. My step mom was there. He didnt even apologize. #TSAVaginaMonologues

Though Rye wrote the invasive search was humiliating and made her feel ashamed, she shared her experience in order to challenge the notion that searches, like the one she underwent, are truly helpful for preventing terrorist attacks.

Rye said in the Periscope stream that she had never been subject to unwanted touching before that search, but she wrote that she worries how those kinds of searches emotionally impact sexual assault survivors.

“Of course, we want America to be safe and protected but we should not violate the emotional and physical safety of our nation’s citizens at the same time,” Rye wrote. “Perhaps it’s time for the TSA to invest in new equipment. It is definitely time for them to keep their hands away from vaginas.”