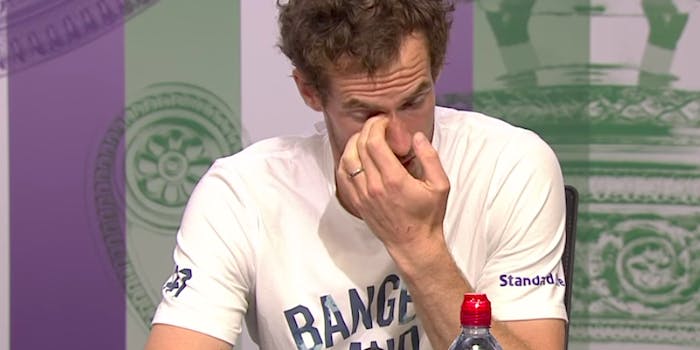 The conference took a turn when Murray corrected a reporter's question.

Top-ranked tennis star Andy Murray was eliminated after his loss to Sam Querrey in Wimbledon, but it’s his win for women that is making headlines.

Murray, an Olympic gold medalist who is currently ranked No. 1 in men’s singles, lost at Wimbledon in an upset to No. 24-ranked American competitor Querrey. But in his post-match press conference, where people expected an explanation for the unlikely defeat, things took a turn when Murray corrected a reporter’s question.

In the exchange, the reporter stated that Querrey was “the first U.S. player to reach a major semifinal since 2009.” Murray interrupted him mid-sentence with the two words: “Male player.”

American competitor Serena Williams has won 14 Grand Slam tournaments since 2009, which the reporter failed to mention. This isn’t the first time Murray has corrected casual sexism in tennis. During the 2016 Olympics, a BBC reporter congratulated Murray on being the “first person to ever win two Olympic tennis gold medals.” With yet another perfect response, he said “Venus and Serena have won about four each.”

Twitter congratulated Murray in 2016, and they’re celebrating his feminist moment once more.

Is Andy Murray the most doggedly feminist *male* player in tennis? This seems to happen every year, but he's always ready to call shit out. https://t.co/fQqKMYC4W4