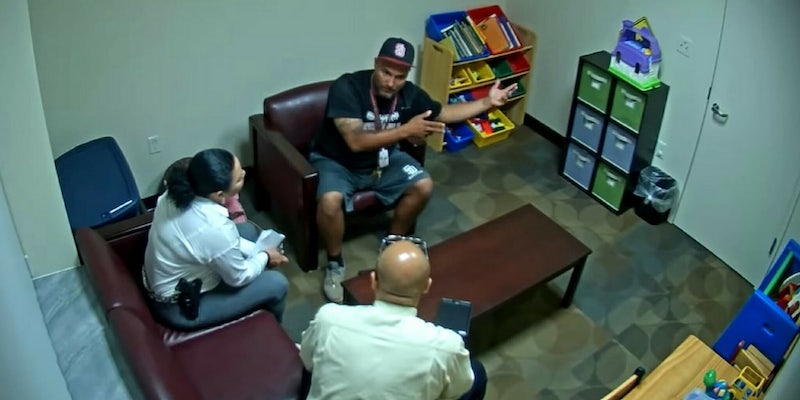 He only got a three-day suspension for the harassment.

The Parkland guard who didn’t stop the shooter who killed 17 at Marjorie Stoneman Douglas High School in February was suspended last year after two students said he sexually harassed them, according to records obtained by the Sun Sentinel. The 39-year-old guard and basketball coach, Andrew Medina, would call them inappropriate names, the students said, making them so uncomfortable that they changed their routes to class to avoid him.

One of the teenagers who said Medina had sexually harassed her, Meadow Pollack, was killed in the Parkland shooting.

According to the records obtained by the Sun Sentinel, the district’s Professional Standards Committee reviewed the claims against Medina in October and found probable cause to charge him with inappropriate conduct. The committee found that he asked out one student, and told another she was “fine as fuck,” looking her up and down saying, “damn Mami.” Neither student was identified in the report.

Security footage also showed that Medina asked one of the students where she worked, and whether he could come by, saying, “He would wait for her and because it was not at school, he could flirt with her.” The girl said the interaction upset her so much that she didn’t go to work. She later learned that Medina hadn’t stopped by. Medina asked the same student out for drinks three weeks later and told her “that they had to keep this low key,” according to a report of the investigation.

“Both students became so uncomfortable with Mr. Medina’s comments and actions, they sought out different routes to their classes in an attempt to avoid him,” the report prepared in October by Robert Spence, a detective with the district’s Special Investigative Unit, said.

The report recommended firing Medina, but he was instead suspended because he denied the allegations and had no previous disciplinary record. A spokesperson for the district told the Sentinel that its practice is for Superintendent Robert Runcie to meet with the unit and district lawyers to review discipline recommendations for “consistent and appropriate application of discipline.”

Medina then served his suspension in three different pay periods, instead of all at once, to “retain enough to provide for his family’s needs.” He also attended a three-hour sexual harassment training course.

“There was no direct evidence to distinguish between the conflicting statements provided by the students and the employee, and there were no previous records of discipline for the employee,” the district spokesperson, Tracy Clark, said.

According to BuzzFeed News, the Pollack family said they only found out about the harassment reports 10 days ago. Meadow’s father Andrew, who’s resigned from the school’s safety commission last week in order to help elect school board officials and conduct an “independent investigation” of the shooting, said his ex-wife filed a report on the behalf of Meadow, but didn’t tell him because she knew he “would have freaked out.”

Hunter Pollack, Meadow’s brother, said she had told her boyfriend about Medina’s “ongoing gross behavior.” According to him, Meadow said Medina would call her “‘gorgeous and sweetheart’ and just be a creep.” When Meadow’s boyfriend confronted Medina, the brother said Medina threatened the boyfriend.

“What’s killing me is that he should have been terminated and he wasn’t and he was at that gate,” Meadow’s father told BuzzFeed News. “We might have had someone who might have done something like call ‘Code Red’ and instead we had someone with half of a brain who did nothing. And after all this, they reassigned him somewhere else where he might act this way to other girls.”