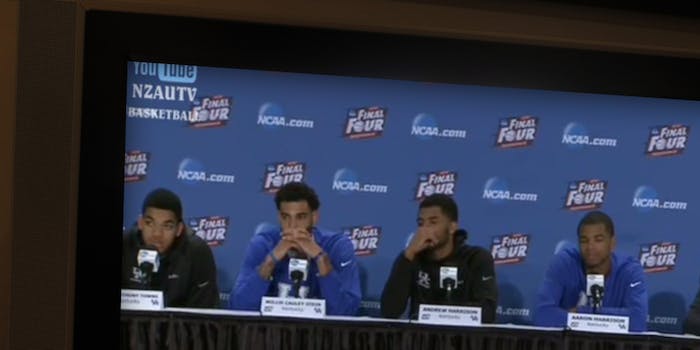 Kentucky had just lost to Wisconsin in the Final Four.

Last night during the NCAA finals, Kentucky lost to Wisconsin after a 39-game winning streak. Kentucky’s Andrew Harrison was obviously unhappy with the loss, but he expressed it in a less-than-ideal way, uttering a racial slur into a hot mic at a post-game press conference.

It started when a reporter asked Kentucky’s Karl-Anthony Towns about Wisconsin player Frank Kaminsky’s performance during the game. As Towns answered the question, Harrison appeared to mutter the slur under his breath, which was caught by the mic.

After social media blew up, Harris issued an apology on Twitter:

First i want to apologize for my poor choice of words used in jest towards a player I respect and know.

We had a good conversation and I wished him good luck in the championship game Monday.

All’s well that ends well, I guess. But haven’t we all learned our lesson about hot mics from The Jinx?