Schumer's fans are not satisfied with her response.

Amy Schumer responded to recent inflammatory comments made by comedian Kurt Metzger in an interview with Charlie Rose that will air Friday.

Metzger, who has been a writer for 39 episodes of Schumer’s hit show Inside Amy Schumer, fired off a series of aggressively worded Facebook posts and tweets in response to the Upright Citizen Brigade (UCB) Theater’s decision to ban an alleged rapist. When fans urged Schumer to speak out, Schumer blocked several Twitter accounts. She later spoke to the controversy on Twitter and expressed her “disappointment.”

I am so saddened and disappointed in Kurt Metzger. He is my friend and a great writer and I couldn't be more against his recent actions.

She also asserted, somewhat confusingly, that Metzger does not work for her because her show is not currently in production. That immediately led to speculation that Inside Amy Schumer had been cancelled by Comedy Central.

Kurt does not work for me. He is not a writer on my show. Please stop asking me about it. His words are not mine.

I didn't fire Kurt. He isn't a writer for my show because we aren't making the show anymore. There are no writers for it.

#InsideAmySchumer is not cancelled. @ComedyCentral has provided us with a wonderful home and we couldn't be happier there. I am just touring

For his part, Metzger issued a post to his Facebook page where he claims he “specifically told [Schumer] to do exactly what she did.” 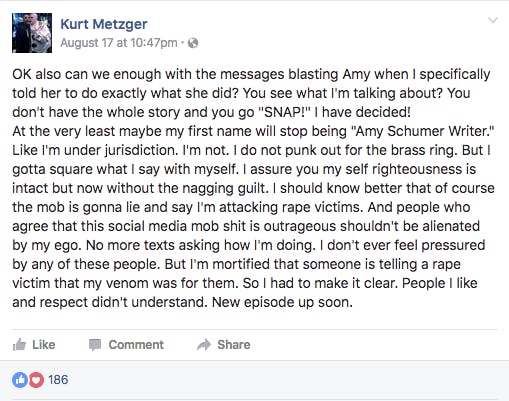 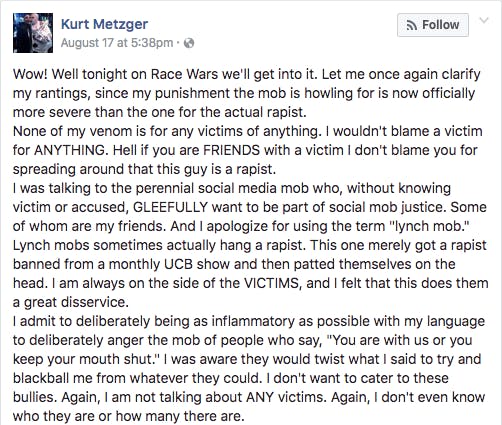 In his apology, Metzger wrote that he did not intend to attack or offend victims of sexual assault, nor did he yell at them to go to the police. He argues that his target, in fact, was a social media mob of “people who said, ‘Women CAN’T go to the police! They have to work outside the system!’” According to Metzger, those who advise victims against seeking the assistance of law enforcement following rape or sexual assault are ensuring rapists “walk free.” 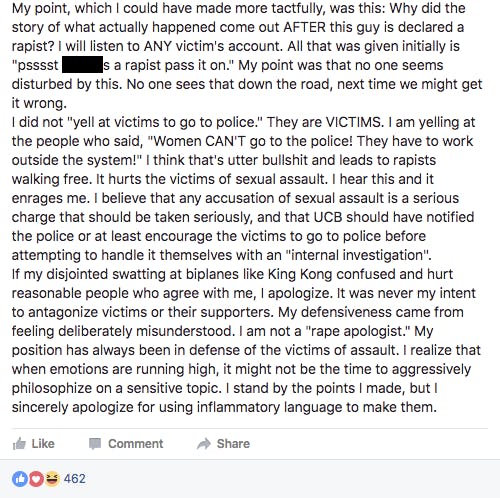 Metzer has written extensively about rape on Facebook. On Aug. 13, he wrote that under the right circumstances, he could understand why women would be hesitant to go to the cops, using the Bill Cosby scandal as an example.

A post earlier on the same evening from Metzger urges women to “call the cops FIRST.”

The origins of Metzger’s “cops first” argument are unclear. The Daily Dot reached out to multiple women in the UCB comedy community, but no one could point to a post that urged victims not to go to the police.

Comedian Mo Fry Pasic, who studied at UCB and continues to perform there occasionally, told the Daily Dot, “I have not seen anyone advise not going to the police, but situationally, I can see someone explaining the hypothetical in which a woman feels like she can’t go to the police.”

She added, “I truly think that’s how he interpreted people trying to describe rape culture to him.”

So, who exactly was Metzger speaking to? Who is this “social media mob?”

On Twitter, Metzger urged his followers to listen to an episode of his podcast, Race Wars, to get his side of the story.

Tune in to @racewarspodcast to her me take your weak and immoral arguments apart.

The episode, “Rape Wars,” covers the events of the past few days and makes mention of a comedian named Alison Klemp. While Klemp made no public Facebook posts advising victims against going to the police, a search for “not going to the police” reveals a post where she publicly critiques Saturday Night Live writer Michael Che. Klemps point is not that women should not go to the police, but rather that we do not know if they have or have not. 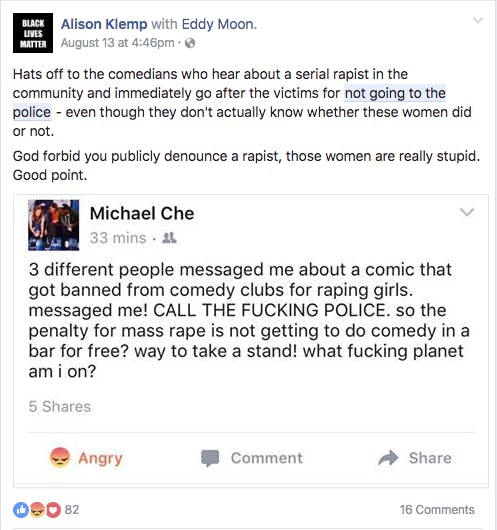 Michael Che’s post also makes no mention of posts publicly outing the banned comedian. Rather, he states that he received private messages. So it is unclear where the “trial by social media” Metzger describes in his podcast occurred, or if it occurred at all; it is possible that Metzger is referring to private posts shared by members of the community who do not overlap with those the Daily Dot approached.

It is documented, however, that the banned comedian caught wind of information that was being shared and made a public post on his own Facebook account on Saturday night. The post professed his innocence and was later deleted. Metzger himself has continued to openly use the banned comedian’s name in his posts.

Nevertheless, Metzger is eager for his audience to know that his heart is in the right place. The podcast features a phone call with comedian Barry Crimmins. Crimmins, who was featured in the Netflix documentary Call Me Lucky, spent years fighting AOL in court to hold the company accountable for allowing, and profiting off of, child pornography exchanged and circulated via their internet services in the ’90s. Crimmins himself was a victim of sexual abuse as a child, and he vouches for Metzger, calling him a “good guy,” and adding, “I think the world of him.”

Crimmins does not, however, approve of the language Metzger used in his satirical post, where he warns the comedy community about the dangers of a fictitious rapist. Crimmins specifies that he would not have made use of the term “good hole,” and Metzger agrees that he made an error in judgment.

Since the podcast aired, Metzger has also made several posts to his Facebook, sharing stories he says he has received from women who agree with him but do not feel comfortable sharing their support publicly.

In one post, Metzger said he is “appalled” at how the “social media mob” has intimidated these women, though he deemed the term he formerly used, “lynch mob,” now unsuitable for reasons below. 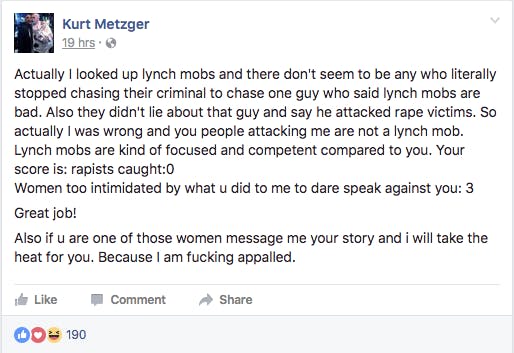 Meanwhile, Schumer, who is currently touring to promote the release of her book, The Girl With the Lower Back Tattoo, has continued to receive pressure to answer for Metzger’s actions. On Thursday afternoon, Schumer shared a clip teasing her Friday appearance on Charlie Rose where she discusses the writer and his actions.

I am lucky enough to be on @charlierose tomorrow. Here is a clip where I talk about @kurtmetzger https://t.co/csPRkAalfx

Schumer calls Metzger a “great writer” and attributes much of his success on her show to having “views [that] are so different” from her own and “most of the other writers in the room, especially Jessi Klein, who’s the head writer on the show.”

Schumer adds: “We butt heads; we get in fights because he infuriates us… It’s an interesting writers’ room because it’s always been very diverse with the views in there. We don’t want it to just be one-sided.”

In the clip, Schumer also alludes to her own experience as a survivor of sexual assault, saying she would like to draw focus back to the bigger issue of rape and sexual assault.

Many viewers have been critical of Schumer’s statements in the interview.

You're completely side-stepping the issue. You acknowledge he baits people. He's not the victim. And, yeah, he is on your staff.

didn't know "misogyny" was the type of diversity you need in a writers room.

Pasic was among those dissatisfied with Schumer’s reaction and expressed her frustration on Twitter.

“I am a fan of Amy Schumer, and [I] know she can’t fix the world, but it truly upset me to see her actions in a time of crisis. It’s clear to me in her interview she missed the greater point… Her associations and friendships have a cultural impact because of her status… Asking people to separate her from Metzger because they were distracting from the greater conversation about rape culture is silencing and blaming.”

For many, however, the focus remains on the looming question of Metzger’s employment. Several viewers noticed that Schumer’s language neither confirms nor denies whether Metzger would be welcome to return for a fifth season once production begins.

On Thursday evening, Metzger abandoned his harsh tone and posted what he called “a final thing” asking those who support him to “tone down all the angries.” 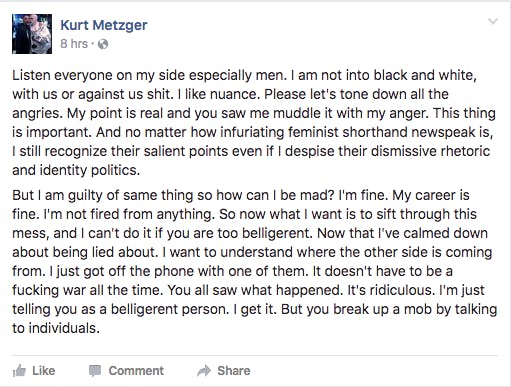 He added in the comments:

It remains unclear if Metzger will be invited to return in the case of a new season of Inside Amy Schumer. In his final post, Metzger wrote, “My career is fine. I’m not fired from anything.”