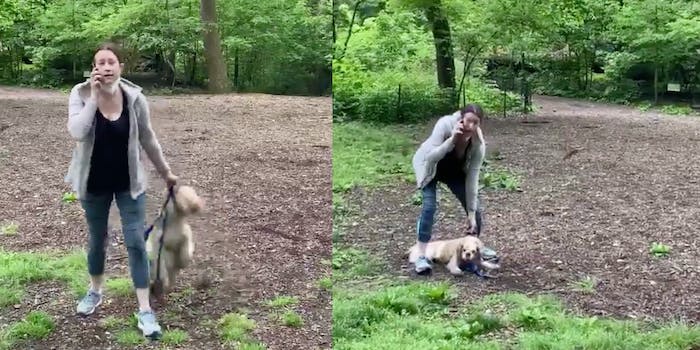 A video of Cooper calling police on a Black man went mega-viral in May.

Amy Cooper made a second phone call to 911 and falsely claimed that bird watcher Christian Cooper assaulted her, according to a prosecutor’s statement on Wednesday, the New York Times reports.

Amy Cooper and Christian Cooper are not related.

The incident, which took place in New York’s Central Park the same day police killed George Floyd and sparked a nationwide movement, was recorded by Christian Cooper and uploaded to Twitter by his sister.

The video showed Amy Cooper on the phone with 911 and yelling that an “African American man” was threatening her. She made the phone call after Christian Cooper asked her to put her dog on a leash, per the rules of the park. The video immediately went viral and garnered thousands of views. To date, it’s been viewed almost 45 million times.

Amy Cooper was subsequently fired and slapped with criminal charges for making a false report. She followed a dangerous pattern of calling cops on Black people for no reason, something that can prove fatal for the Black person involved in many cases.

But prosecutors say there was more to the story. Cooper “[made] a second call indicating that he tried to assault her in the Ramble area of the park,” said senior prosecutor Joan Illuzzi, according to the Times report.

The second phone call was not publicly known until Wednesday’s statement. Amy Cooper reportedly retracted the accusation after the police arrived on the scene.

Per the Times, the district attorney was looking into a plea deal that would help her avoid jail time. Illuzzi told the court that they were looking at options wherein she would receive education on the context of the situation to learn why her actions were dangerous.

Cooper’s case prompted New York Governor Andrew Cuomo to back a bill, nicknamed the “Amy Cooper Bill,” that would make false 911 calls based on one’s identity a hate crime.

Manhattan district attorney Cyrus R. Vance Jr. called Cooper’s call a “hoax” on Wednesday and said that those who make such false 911 calls would be held accountable.

Cooper’s lawyer, Robert Barnes, argued against “cancel culture” in June and said viral videos can “destroy” lives. Christian Cooper did not assist the prosecutors for the case and has previously said that the backlash Amy Cooper faced was enough.