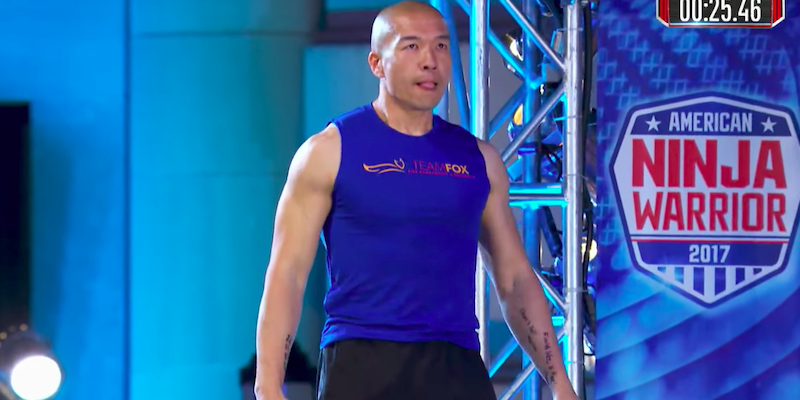 'You don't always have to hit the buzzer to be a winner.'

“You don’t always have to hit the buzzer to be a winner,” host Matt Iseman said.

Choi, a tech consultant from Bolingbrook, Illinois, made an amazing run through the course by any measure. The 41-year-old leapt and dived his way to the broken pipes round, an obstacle that took out the most competitors that night. In any circumstance, this was an achievement, but Choi was especially inspiring by competing for the disease he battles.

In a raw and emotional video montage before the run, Choi shared that he was diagnosed with young-onset Parkinson’s disease, the involuntary movement of muscles, at just 27. During the early stages of the disease, Choi admitted he went through depression—a time in his life his wife calls “the dark years.”

In 2012, nearly nine years after being diagnosed, Choi turned to exercise to help manage his symptoms and depression. He has since competed in marathons, hundreds of miles of bike riding, and triathlons, having raised over $100,000 for the Michael J. Fox Foundation.

Before the race, Fox appeared on the jumbo screen with some final words of encouragement for the warrior: “Whatever happens tonight you’re already an inspiration to your family, people with Parkinson’s, everyone watching, and me.”

Still thinking of last nights #AmericanNinjaWarrior
Jimmy Choi is a WARRIOR!
Taking the first step is the Only way!
Watch it! Be inspired!

Jimmy Choi – 100% Ninja – such an honor to watch your incredible run! #TeamFox #AmericanNinjaWarrior

I have a new hero. Jimmy Choi is the epitome of a warrior. So inspirational. #AmericanNinjaWarrior #teamfox

While the world was impressed with Choi’s run, he says he has “unfinished business.”

Thank you @Akbar_Gbaja! I have unfinished business. Hoping next year I can stare you face to face from top of the wall! https://t.co/Di0xGcmL7T

If Choi and his daughter keep up their training, we could see two Chois battling for the buzzer in a future episode.