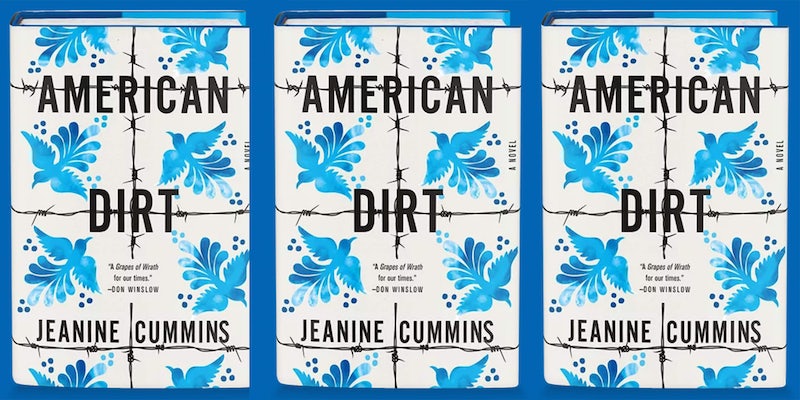 The novel American Dirt by Jeanine Cummins was published this week after months of anticipation. The novel fixates on a Mexican family confronting and then fleeing from the violence in their country. It’s been coined by critics as a story that speaks to the immigrant experience, and its pull for empathy has led to many accolades. It’s even the most recent addition to Oprah Winfrey’s book club.

But many writers of color take serious issue with American Dirt and what its publication signifies for the book industry. It’s become a metaphor for stolen land, co-opted experiences, and the white writer’s burden.

Amid increasingly fascistic policies at the U.S./Mexican border under the Trump administration, American Dirt comes at a pivotal time. The novel follows Lydia, a mother in Mexico, as she flees with her son following a shooting that killed most of her family. On the level of writing and craft, the novel is filled with bumbling sentences and confusing characterization. Lydia, for example, shifts from intellectual to surprised at basic facts about Mexico, her native country.

Even more troubling than plot points is that Cummins is a white writer with Puerto Rican heritage who chose to portray and profit from immigrant experiences.

Cummins once said that she wanted to give the faceless mass of immigrants “a face” through her writing. The hollow statement seems even more so considering that at a party to celebrate the novel in May 2019, the table decorations were wrapped with barbed wire.

Adding fuel to the fire, Cummins landed a seven-figure book deal for American Dirt. In 2015, a survey revealed that 80% of people in the publishing industry identified as white and that on a yearly basis, only 10% of books are written by people from diverse backgrounds.

So what does it mean when white people, especially white writers, choose to give a voice to people that already exist? It means that white writers like Cummins can overshadow actual lives with their own interpretations. The white man’s burden becomes the white writer’s burden.

“It’s a problem what are considered the ‘important stories’ about the marginalized continue to be those which focus on our pain and traumatization and/or are written by white authors relying on tired stereotypes, and reductive renderings of our experience,” says Adrianna Herrera, an Afro-Dominicana author who wrote The Dreamers series. “Imagine how broken a system has to be for a publisher to, at this moment in time, to host a dinner for a book about the humanitarian crisis happening at the U.S./Mexico border and not a single person there to think barbed wire centerpieces were in poor taste.”

As a queer, Black writer and child of immigrants, the immigrant narrative is both personal and political for me. I believe that the immigrant experience can exist outside of the moralistic retellings of white America because we exist in different versions of America simultaneously.

In my American story, I came of age with an undocumented father whom I visited in prison during my high school years, and Father’s Day is a dreary reoccurrence. In my American story, there is a community of writers from diverse backgrounds, like myself and Herrera, who can speak for ourselves.

White voices have always tried to grapple with race and trauma under the guise of empathy or entertainment. Material images of trauma, like a Mexican mother clutching her child as she attempts to dodge the tear gas canisters of border patrol or the harrowing shootout before the dramatic exit to another land, can be folded into a tidy national narrative.

Trauma becomes the clay that white hands can mold while ignoring their own complacency in a history of political intervention. But there’s no denying that white hands played a part in the Mexican-American War that led to Mexico losing one-third of its territory, in helping General Victoriano Huerta come to power during the Mexican Revolution, and in the damaging economic effects of NAFTA.

American Dirt continues a tradition of white erasure that ignores the array of American stories held by people who live here. But we are far more than the dirt that America has built itself upon.