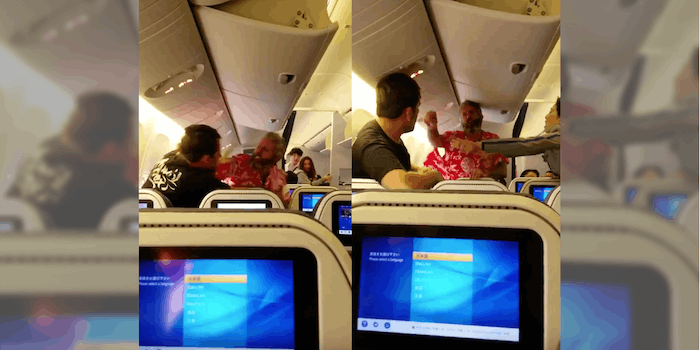 'I'll kill you!' the man threatened.

An unidentified American in his 40s has been arrested after attacking a fellow passenger and threatening to kill him, then later choking a flight attendant on a plane out of Toyko on Monday, the Washington Post reported.

The All Nippon flight was scheduled to fly to Los Angeles but was delayed in taking off for an hour and a half, which is when the fight occurred. A video of the altercation shows a man in a black shirt and another in a red shirt fighting across separate rows of seats, causing children to cry and shocked passengers to move away.

A flight attendant manages to break up the fight before the man in the red shirt says, “I’ll kill you,” to the other passenger and walks toward the front of the plane. He then returns to the other man’s row and they continue fighting, at which point the person recording begins to assist the flight attendant in intervening.

According to the man recording the fight, a Phoenix-based videographer named Corey Hour, the man in the red shirt randomly turned on the other passenger before takeoff.

“He literally just flipped,” Hour told the Post. “Nobody knows why.”

In the video, the man in black yells, “Someone help, this guy is crazy!” to which the man in red says something indiscernible before threatening to kill him.

Hour said he stopped filming to step in. He also offered other details about the instigator, such as that he had yelled something about “America” while initially walking off the plane, and that he rhetorically asked, “You think I’m crazy? What about the government!” though he offered no specifics on his posit.

For the record ANA staff and passengers handled the situation with grace and respect. They did the best they could to diffuse the situation.

As of now and after speaking with the other passengers the motive for why he did this is still UNKNOWN. None of us have any idea why at all.

According to Japan Today via the Post, the passenger eventually left the airplane, then choked a male All Nippon Airways employee. He was arrested and charged with assault, his checked backs and luggage removed from the flight. A statement from All Nippon Airways to the Post apologized to passengers.

“All Nippon Airways apologizes to our passengers on Flight#6 to Los Angeles for the pre-flight incident,” a spokeswoman wrote in an email statement. “The individuals involved have been dealt with appropriately by local law enforcement.”