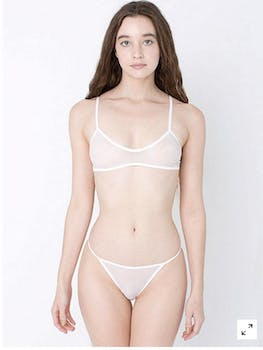 What happened to the nipples on these American Apparel models?

For all its faults, American Apparel has been fairly body-positive. But something is changing.

Ladies have nipples. Ladies have pubic hair. Ladies have other assorted hanging, dangling, and bulging bits. While prudish social networks might try to convince you otherwise, this is the cold truth about the female anatomy.

To American Apparel’s credit, despite its skeevy reputation, it has always been one of the few companies to not airbrush models within an inch of their lives. Women proudly sport erect nipples, cellulite, and full-on ’70s bush in American Apparel ads. But that seems to be changing. Over the past week or so, the website has been quietly airbrushing its models’ nipples and pubic hair. #FreeTheNipple, indeed.

As the eagle-eyed Prachi Gupta at Animal New York points out, last week this model’s nipples were visible through her $20 Le Grind Glissnet bra. This week, however, it appears those nipples have mysteriously disappeared: Has anyone seen a disembodied nipple? Anyone? Check the pockets on your gray zip-up hoodie?

This woman modeling the Le Grind Glissnet Baby Doll appears to have been stricken by the same mysterious Disappearing Nipple disease: As does the woman modeling the very clearly transparent Dahlia Lace bra: 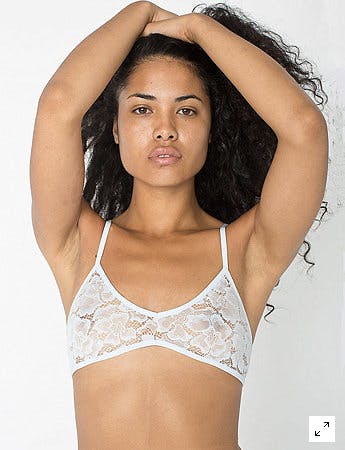 If you’re a lady who’s shopped at American Apparel, you might be wondering, “Hey, I’ve bought American Apparel underwear before, and it offers very little coverage. Why would American Apparel dupe a loyal consumer by airbrushing their models’ nipples, so I don’t know how the garment will actually look on my body?”

The answer to that question might lie with Paula Schneider, the CEO of American Apparel, who replaced serial alleged sexual harasser Dov Charney last year. In an interview with the New York Times, Schneider said she wanted the company to move away from its “borderline pornographic” marketing campaigns to focus more on millennial social issues.

Whether nipples and pubic hair are inherently “borderline pornographic,” rather than just natural parts of the female body, is up for debate. But don’t expect unofficial #FreeTheNipple spokeslady Scout Willis to start doing topless modeling for American Apparel anytime soon.