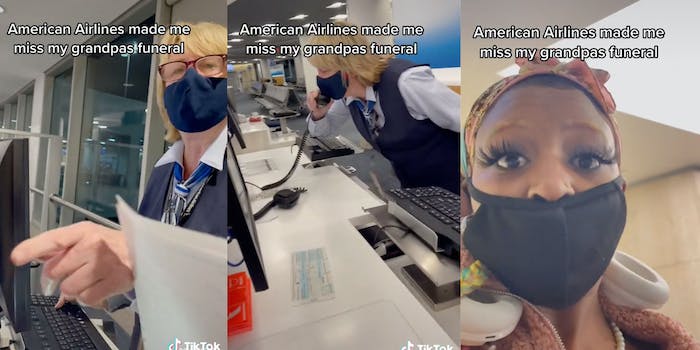 ‘My bag f*cking fits’: TikToker calls out airline employees for making her miss her grandfather’s funeral

It began with an argument over a checked bag.

American Airlines was put on blast for refusing to allow a Black woman on her flight, which she documented in a series of viral TikToks. The first video, posted Sept. 15 by user @jazyrich, has gotten 3.6 million views and 300,000 likes.

The first video begins with a voice assistant reading on-screen text that says, “American Airlines made me miss my grandpas funeral.” The TikToker then asks three employees why she can’t board, and one of them says that she did not answer the airline’s security questions.

Finally, the employee says she needs to see the TikToker’s boarding pass.

“But you already saw my boarding pass,” the TikToker responds. “This is the third time, so what other question do you need to answer?”

She then explains to the audience that the employee said she could not board because her carry-on didn’t fit.

“They said my bag didn’t fit into this damn carry-on check, and my bag fucking fits,” she says as she places her bag into the carry-on sizer. Soon after, the supervisor arrives and speaks to the employee before turning his attention to the TikToker to ask her about the situation.

The TikToker begins explaining to the supervisor in the second video that, at the employee’s request, she proved that her carry-on fit in the sizer and consolidated her other bags, but she did not submit to the request to check her luggage with the airline.

As she speaks, the supervisor turns her suitcase so that it is facing forward in the carry-on sizer and no longer fits properly. The employee then repeats that the TikToker refused to answer the security questions.

“No, no, no, no, no,”” she replies. “Don’t lie on me, ma’am.” She reiterates her version of the story and adds that after the employee told her she would not be allowed on the flight, she asked what she would have to do to board and agreed to check her luggage if necessary.

The supervisor asks her to lower her voice as she speaks, and she refuses. “Excuse me, do not tell me how to react, and don’t control my voice,” she says, seemingly on the verge of tears.

“Based on the way you’re reacting to me right now, I wouldn’t let you board,” the supervisor says as the TikToker continues to speak at the same volume. However, in the next two videos, he says that he will work on getting the TikToker a flight for that day.

In the fifth video, the TikToker says that the airline is trying to “hold up” her money, suggesting that she declined the supervisor’s offer to find her another flight and requested a refund instead.

“Okay, okay, so now they want to hold up my money,” she says. “They said it’ll return to my card in seven to ten days, and then they said let’s call the police.”

The TikToker grabs her bag and decides to book another flight on her phone in the seating area while waiting for the police. In the seventh video, an officer arrives and offers to help her find another flight. She declines the offer.

In the next video, the officer goes up to the desk to confirm that @jazyrich is banned.

An employee tells him that the TikToker “can do whatever she wants,” but she cannot be in the area if she is not a “valid” American Airlines passenger. The employee asks the officer to tell the TikToker to step out while the airline determines whether she will be allowed to fly with them.

The last video taken at the airport is titled “PART 10,” but it is the ninth video in the series. It is unclear if this is a typo or if a video from the series has been removed from TikTok. In it, the woman explains that she is trying to rebook and the employees keep calling security on her.

The TikToker also posted two videos on Sept. 15 unrelated to the incident to “cheer [herself] up.” In the first video, she is dancing in the alcohol section of a grocery store with another woman. She says in the comments that the videos she uploaded of the airport incident were old, but she did not specify how old they were.

The following day, she posted four videos responding to comments from the original series. In the first, she explains that she did not want to check her bag because the flight was to Minneapolis with a connection in Charlotte, and she was getting off at the connection.

The comments on the original videos and some of the follow-ups are disabled. However, people still commented about the American Airlines situation on unrelated videos. Some commenters supported the TikToker, but many others felt she was wrong.

Several even accused the TikToker of committing a crime for trying to get off at the connection and not the final destination. The practice, called “hidden city ticketing” violates American Airlines’ “conditions of carriage.”

The policy notes that another prohibited booking practice is illegal, but it does not make the same note for hidden city ticketing. It is also unclear whether American Airlines refused to allow her to fly because of her booking practice.

On Sept. 18, @jazyrich posted a video from her grandfather’s funeral. It is not clear if she is the person recording the video.

The TikToker also posted a video on Sept. 26 that shows a screenshot of a message sent to her by a representative of another airline. The representative wrote that it “hurts” to see American Airlines treat passengers the way she was treated. He offered her a free flight “on behalf of [American Airlines’] mistake.”

The Daily Dot reached out to @jazyrich via TikTok comment and to American Airlines via email. Neither immediately responded to the request for comment.