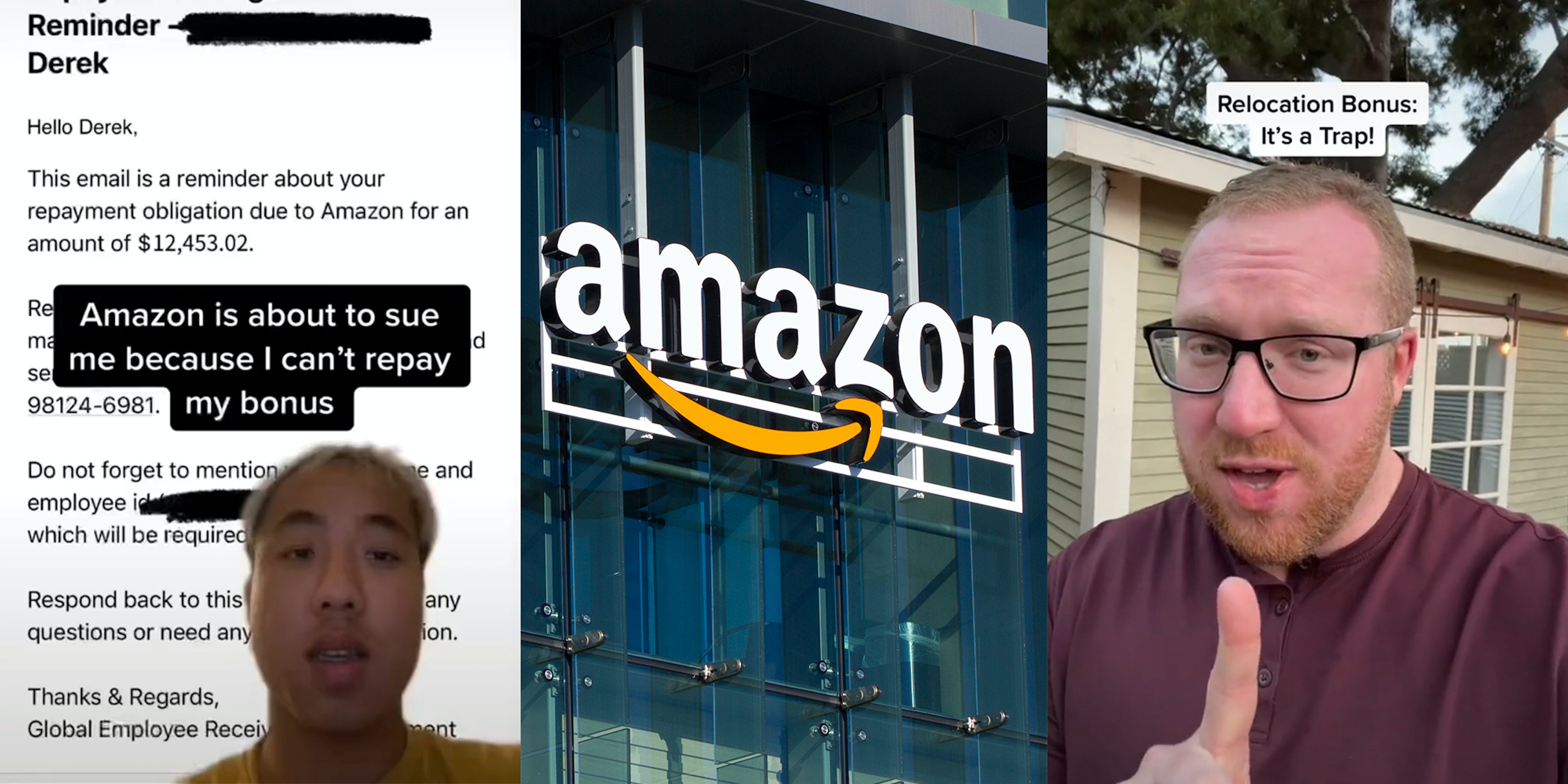 ‘Amazon is about to sue me because I can’t repay my bonus’: Lawyer exposes job relocation perks

'It looks really generous… but read the fine print.'

TikToker and lawyer Ryan Stygar has gone viral after alleging Amazon’s relocation package features a peculiar clause: If you quit or are fired after under two years, you have to pay back some of the money they gave you, which can total over $20,000.

For context, Amazon can offer prospective employees a negotiable relocation package to help them manage costs associated with moving into their new position at the company.

It is unclear whether the email featured in this video is real, but there are a few details that would indicate something is amiss.

For example, the font differs between the dollar amount and date, with the differences especially apparent on the 2 and 4.

However, emails like this have been discussed online a few times before. Just under a year ago, someone posted a similar-looking email to Reddit asking if it was legitimate. Most commenters agreed that it was a scam, though some noted that there was a repayment provision in their Amazon contract. Other posts on Reddit also reference repaying the bonus.

Similar letters can be found across the web. Two posts on job site Blind share letters claiming that an employee must repay Amazon Corporate LLC per “the agreement set forth in [their] offer letter.” Curiously, these, along with the original Reddit post, are the only posts cataloged by Google linking Amazon Corporate LLC to the P.O. Box 94681.

It is still possible that these emails are legitimate, but if one receives an email like this, redditors under the first post say they should verify the legitimacy email with their HR representative.

Regardless of whether the emails themselves are legitimate, it seems the practice referenced within them—clawing back bonus money if an Amazon employee leaves the job before a set amount of time—is accurately described. There are posts on sites like Glassdoor and Quora making specific note of the practice, and other posts on Blind also talk about the process of returning a relocation bonus.

As Ryan explains in his video, this practice is entirely legal—but manageable.

“This is why relocation bonuses are so tricky,” he says. “It looks really generous… but read the fine print. If you don’t stay there for two years, or get fired, or can’t continue for an uncovered reason, they will try to collect the entire amount.”

“They’re not going to sue you,” Ryan continues, responding to the original TikTok. “They’ll send you to collections, and if you talk to an attorney, they might be able to negotiate that amount down for you, or get it waived entirely.”

In comments, users were incensed by this discovery about Amazon’s relocation agreements.

“​​I dont think they should be able to force you to pay it back if they fire you,” shared one user. “Theyll just find a reason to fire you right before the deadline.”

But according to Ryan in comments, the practice is “pretty standard.”

As a result, Ryan says people should be careful before they agree to any relocation bonus. As he notes in the video, “Always think carefully before you accept the money!”