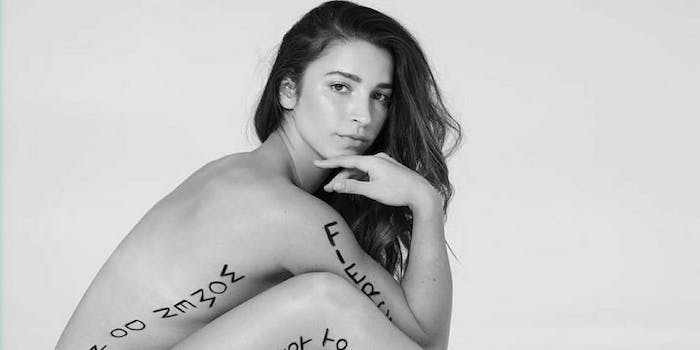 Aly Raisman has a message for victim blamers

'Women do not have to be modest to be respected.'

Less than a month after delivering her impact statement against former Team USA gymnastics trainer Larry Nassar, who she and more than 100 other athletes say sexually assaulted them while in his care, two-time Olympian Aly Raisman has continued to speak up against sexual assault, this time in Sports Illustrated‘s swimsuit issue.

On Tuesday, Raisman shared a photo on Instagram from her shoot for the issue’s project evoking the Me Too movement against sexual assault and harassment titled “In Her Own Words.”

The photo series depicts models and athletes such as Robyn Lawley and Raisman posted nude, with words written in black in across their arms, legs, and torso. In Raisman’s photo, she’s used phrases such as, “Women do not have to be modest to be respected” along her right side, with “fierce” on her right arm. Raisman is also featured in the swimsuit portion of the magazine.

Women do not have to be modest to be respected– Live for you! Everyone should feel comfortable expressing themselves however makes them happy. Women can be intelligent, fierce, sexy, powerful, strong, advocate for change while wearing what makes them feel best. The time where women are taught to be ashamed of their bodies is OVER. The female body is beautiful and we should all be proud of who we are, inside and out. Thank you so much @si_swimsuit @mj_day @darciebaum @ja_neyney @taylorbphoto & the rest of the team.

In the post’s caption, Raisman seemed to call out critics who have questioned the “In Her Own Words” feature, who speculated the magazine’s impact in attempting to spotlight sexual harassment and assault within the swimsuit issue, traditionally used to objectify women for male pleasure.

“The time where women are taught to be ashamed of their bodies is OVER,” Raisman wrote. “The female body is beautiful and we should all be proud of who we are, inside and out.”

In a behind-the-scenes video of her photoshoot posted to the magazine’s Instagram account for the swimsuit edition, Raisman said she enjoyed getting to act as her own director on the set.

“I’ve decided to be so honest about what I went through because the tough times are very hard to talk about and they are uncomfortable but they are equally as important in shaping us as the good times, and being able to express yourself and write words on your body that mean something to you is something I’ve never had the opportunity to do before,” Raisman said.

Watch the behind-the-scenes video of Raisman’s shoot below:

IN HER OWN WORDS: @alyraisman is a SURVIVOR and proud of it. #SISwim 2018