The shooting of Alton Brown did not happen

You're thinking of an entirely different Alton.

There are a number of people on Twitter who are, at this moment, very concerned with the well-being of celebrity chef and television personality Alton Brown. They are, by and large, outraged that the 53-year old host of Iron Chef America was held down and shot at point-blank range by police officers in Baton Rouge, Louisiana.

Brown, however, is very much alive.

His representatives didn’t immediately respond to a request for comment, but we’re going to go ahead and assume he is safe and sound. Some people on social media— such as whoever runs BET’s Twitter account—confused Brown, a graduate of the New England Culinary Institute and host of a podcast called The Alton Browncast, with Alton Sterling, the 37-year old African-American man whose death has sent shockwaves of outrage across the nation.

Close Up Video of Alton Brown Shooting Surfaces: This is completely indefensible https://t.co/GJ1bnNZmCa

Combined with the shooting death of Philandro Castile, a Minnesota man who was killed by police officer while reaching for his ID as he sat in his girlfriend’s car, the two events have brought a renewed outrage about the injustices people of color regularly suffer at the hands of law enforcement.

But it looks as if a lot of people weren’t thinking before tweeting.

The Philando Castile incident appears fucked up, no justification. Alton Brown? Justifiable. Look up the circumstances and criminal record.

Black people, what should we care about. The thousands of blacks shooting blacks or the pedophile who pulled a gun and got shot? #AltonBrown

In a photo caption in an article about Sterling’s death, the lefty website Salon misidentified Sterling as Brown. 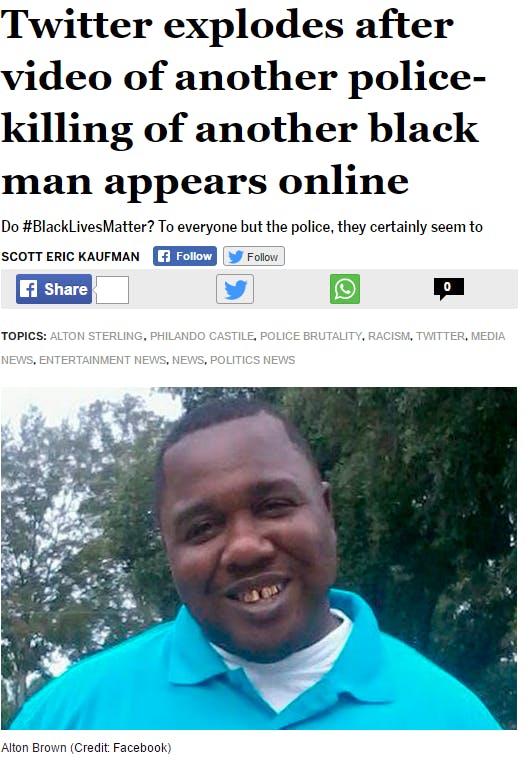 It wasn’t just on social media; people made the mistake on TV, too.

This is Alton Brown:

BRUH THIS IS ALTON BROWN pic.twitter.com/H5sBb1EYJ8

This is Alton Sterling. You can click the link the tweet embedded below to donate to a fundraiser to benefit his family, if you so choose:

This is you laughing at people not knowing the difference between the two Altons:

According to HowManyOfMe.com, there are over 53,000 people in the United States with the first name Alton.

Where Brown is a noted and formidable opponent of single-use kitchen gadgets, critics of the ways American police forces operate believe Sterling is a an example of a criminal justice system that systematically treats African-Americans unfairly—brutalizing their bodies and criminalizing their activities all as a way to promote a conception of public safety that often defines itself by the color line.

Half of all black people in the United States say they or a family member have personally been treated unfairly by the police.

A study conducted in Rhode Island found that African-Americans were more likely to be stopped than whites while driving in the state, but less likely to receive a citation.

Even though whites use drugs at a higher rate than blacks, blacks are far more likely be arrested for drug-related crimes.

In total, African-Americans are five times more likely to be incarcerated than whites. In some states, the ratio is even higher. In New Jersey, there are 12.2 black people in prison for every one white inmate.

This disparity extends to the juvenile justice system. As of 2013, black juveniles were more than four times as likely to be in the criminal justice system.

Here’s a list of white people who, unlike Sterling and Castile, pointed guns directly at law enforcement officers and didn’t get killed.

In summary—Alton Brown: doing great. America: could be better.