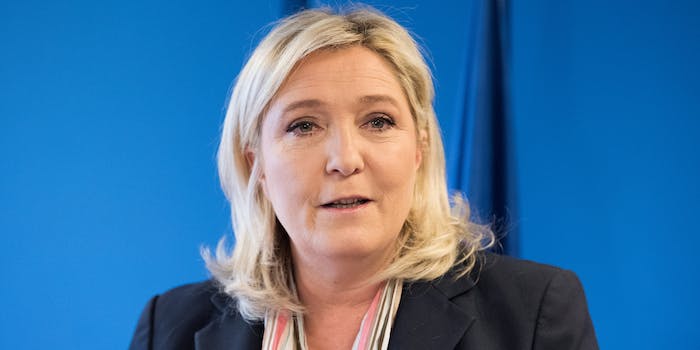 An Infowars writer thinks feminists should vote for a right-wing nationalist.

French presidential candidate Marine Le Pen has been an alt-right favorite for a long time. Serving as the head of France’s right-wing nationalist party the National Front, the country’s hardcore conservatives want her in power.

And on the Internet, the alt-right thinks feminists should vote for her, too. Why? Because she would be the first woman to serve as France’s president.

“So-called ‘feminists’ are trying to block people voting for a woman,” Infowars editor-at-large Paul Joseph Watson tweeted. “She would be the first female president of France. Let that sink in.”

In reality, feminists largely disprove of Le Pen’s platform due to the socioeconomic damage she would create for immigrants, women of color, and Muslim residents.

But the alt-right wants to pit feminists against each other, suggesting that Western feminists cannot truly support women if they don’t support every single woman that runs for office. It’s an attempt to point out supposed hypocrisies in feminism, even though Le Pen isn’t exactly a feminist candidate.

Other alt-right users quickly chimed in after Watson’s post, claiming that Le Pen would make “the best type of woman” for the presidency. Some proceeded to attack Islam, connecting the election back to xenophobic fears against refugees in France.

Why are you shilling for an establishment puppet, Christina? https://t.co/pCXaPYv94s

A Pew Research Center report on the French National Front reveals that the National Front is popular among Catholics, men, and French citizens who have not gone to college. National Front supporters are more likely to dislike Muslims, fear refugees, reject the European Union, and view globalization as an unfavorable phenomenon.

It’s safe to say that the alt-right has found a pleasant home with the National Front.

Le Pen now is onto the second round of the French presidential election, facing off against Emmanuel Macron—a pro-European Union candidate who will be in direct opposition to Le Pen’s anti-EU sentiments. Whether Le Pen will win or not is unclear, although it seems like the alt-right is bolstered by Sunday’s news.