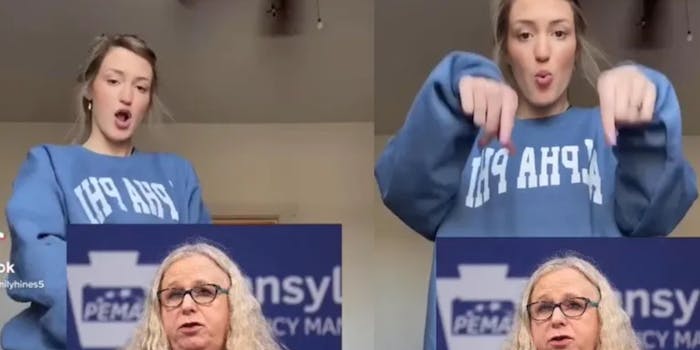 The LSU student fights back after her transphobic video goes viral.

An LSU Alpha Phi member has had her membership canceled after she shared a video mocking U.S. Assistant Secretary for Health Dr. Rachel Levine.

The student, Emily Hines, told Breitbart News that she felt this was censorship, and that she was treated unfairly. Although the video was taken down, according to Breitbart and LGBTQ Nation, it included Hines dancing to the Bee Gees lyrics, “more than a woman, more than a woman to me,” while pointing at a photo of Levine. Levine is the first openly transgender federal official to be confirmed by the state.

The video has since been removed, but it was picked up as a story by Newsmax, which Hines shared to her Instagram account.

She said that she received an email from the organization letting her know that she had been terminated after meeting with some of its executive board members, who said that she had violated the sorority’s social media policies in posting discriminatory content.

“It’s just them trying to censor the opposition out of existence, but it does the exact opposite, by fueling conservative voices to speak out even more, and louder,” Hines told Breitbart.

Pink News reported that the sorority made its beliefs clear with a post from last year in response to Black Lives Matter protests, and isn’t required to keep members who violate their policies.

The post that was shared to Alpha Phi’s Facebook page states that it expects members to be “fair, inclusive and supportive.”

“Alpha Phi joins all who condemn racism, hate, bigotry and violence,” it read. “As Alpha Phis, we expect our members to live up to our high ideals and to show the best qualities of character by being fair, inclusive and supportive.

“Racism, hate, bigotry and violence are in complete contradiction with our purpose.”

The Daily Dot has reached out to Hines and Alpha Phi.