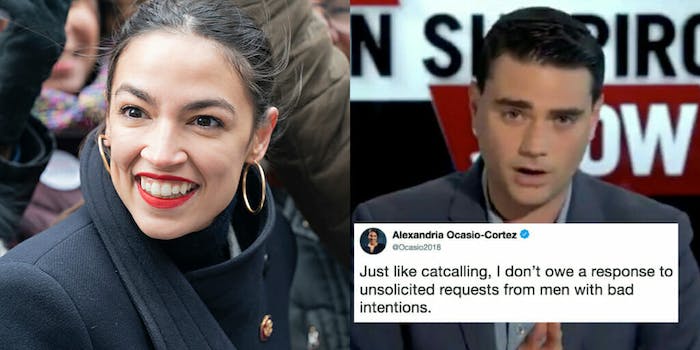 Conservatives are pissed, not quite sure how analogies work.

Alexandria Ocasio-Cortez, the popular New York Democratic candidate for the House of Representatives, has called conservative commentator Ben Shapiro a man “with bad intentions” and likened his request to debate her to those of a catcaller.

On Thursday evening, Ocasio-Cortez shut down Shapiro’s request for a debate (read: opportunity to lambast her for being a Democratic socialist) that he had posed earlier in the day. In a video posted to his Twitter account, Shapiro egged her on by saying that a conservative figure finally wanted to talk with her about the issues, and tried to sweeten the deal (read: showboat) by offering her campaign $10,000.

“Just like catcalling, I don’t owe a response to unsolicited requests from men with bad intentions,” Ocasio-Cortez wrote on Twitter. “And also like catcalling, for some reason they feel entitled to one.”

Just like catcalling, I don’t owe a response to unsolicited requests from men with bad intentions.

And also like catcalling, for some reason they feel entitled to one. pic.twitter.com/rsD17Oq9qe

Ocasio-Cortez is completely right in calling out Shapiro’s intentions. She has no reason to debate him, because she only has to answer to the people in the district who she’ll be representing. And yet, he still asked her to have a debate anyway, because he believes her lack of response equates to her not wanting to be challenged on her views. And so, yes, much like when a man yells innocuous-to-sexual statements at women on the street he doesn’t know, Shapiro’s thirsty request too comes from a place of entitlement.

Shapiro, of course, didn’t take Ocasio-Cortez’s response too well, saying she slandered him by calling him a sexist catcaller without evidence and showed “cowardice and bad intent” in her response.

Discussion and debate are not “bad intentions.” Slandering someone as a sexist catcaller without reason or evidence does demonstrate cowardice and bad intent, however. https://t.co/kYaYuf0W43

But sure, go with “the Orthodox Jew who has never catcalled a woman in his life is ACKSHUALLY a sexist catcaller for asking for a discussion or debate.” I’m sure your media sycophants will eat it up.

Shapiro’s supporters and other conservatives didn’t see the analogy as clearly either, saying Ocasio-Cortez is weaponizing sexism and sexual harassment and doing a disservice to sexual harassment survivors. (And yet I’d guess that a Venn diagram of the people who have a problem with Ocasio-Cortez calling Shapiro a catcaller, and the people who don’t believe the women who’ve said they’ve been harassed and assaulted by Republican politicians, is a full circle.)

For one, this statement is the biggest disservice to women who want to be taken seriously in politics, but more importantly, you’re undermining women who have been sexually harassed. How dare you.

There are universes of difference between "let's debate" and "hey Mami". This conflation of the two, plus "bad intentions", suggests a fear of actual debate- which (again, unlike catcalls), is part and parcel of the arena you stepped into and the life you chose. https://t.co/Ho5izWAhgd

She feels no shame for making a mockery of actual victims. Why? For cheap shot at @benshapiro. Despicable and pathetic. Next-level cowardice on display. Progressives may treat her as a hero, though. https://t.co/XivS1XiRYd

Crying sexism in order to avoid a debate of ideas is not a feminism I want any part of.

No, Ocasio-Cortez didn’t say Shapiro was sexually harassing her. She didn’t say he was being a catcaller, and she certainly didn’t say that his request to debate her was sexist. She simply made an analogy, “a comparison of two otherwise unlike things based on resemblance of a particular aspect,” according to Merriam-Webster. And this resemblance lies between his request for a response—egged on by his friends and supporters—and the demands of a catcaller, and the “particular aspect” that they both share is entitlement and bad-intentions.

At least some people have taken enjoyment in how brazen the replies are to Ocasio-Cortez’s tweet.

The best thing about this tweet is how offended some replies are that she's exercising her free will and autonomy to ignore a ridiculous demand. https://t.co/SRKu8YX7TF