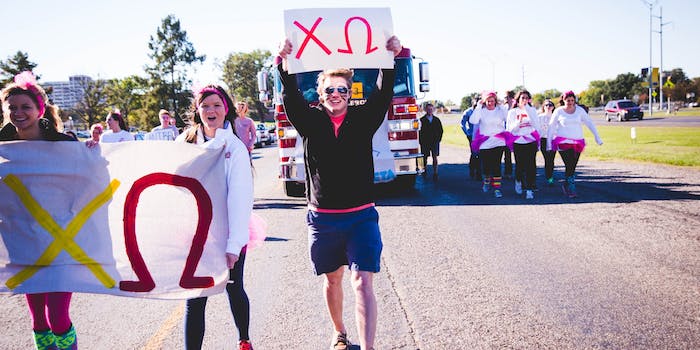 Chi Omega is in the news once again

The University of Alabama chapter of the Chi Omega sorority once again finds itself at the center of controversy thanks to racist remarks by one of its members.

On Thursday, the Crimson White reported that a member of Nu Beta, the sorority‘s local chapter, was removed from the organization after sending a Snapchat photo that contained a racial slur.

The Snapchat message, a screenshot of which the paper reportedly obtained, included the caption “Off probation n—-!” and a photo of a PowerPoint congratulating the chapter.

Deborah Lane, a university spokesperson, said that Nu Beta alerted both the school and Chi Omega’s headquarters to the heinous remarks and quickly removed the student from their organization. The university’s Office of Student Conduct is now handling the situation and will decide what disciplinary action should be taken against the student.

Lane offered this statement to the Crimson White:

The University of Alabama is extremely disappointed when any student uses language that is disrespectful or offensive to any segment of the UA community. Behavior, actions and choices that disparage other students are particularly reprehensible and do not represent the values or meet the expectations of our University community. We will continue to work diligently to ensure that UA is a welcoming and inclusive campus.

But perhaps the University of Alabama isn’t working diligently enough. Nu Beta made news in August 2014 for the exact same offense. After accepting a bid from the sorority, a new member posed for a selfie alongside two friends, captioning the image “Chi O got NO n****s!!!!!” and sending it out via Snapchat. 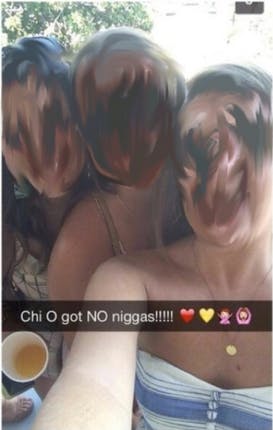 Chi Omega has yet to release a statement about their University of Alabama chapter’s most recent racist incident, although they did take to Facebook to emphasize their commitment to acceptance and diversity following the incident in August.

“Chi Omega embraces women from all walks of life, who come together to form a network of friends with high standards and similar values,” the group wrote.

The Daily Dot has reached out to Chi Omega for comment and will update this story if they respond.