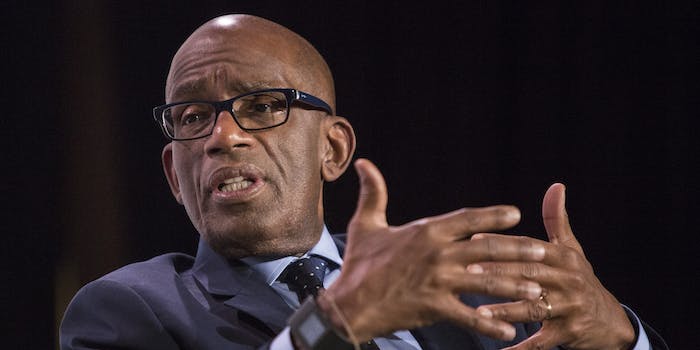 The driver allegedly passed him and picked up a white passenger a block later.

One of TV’s most famous weathermen is speaking up about a recent taxi snub he feels was racially motivated.

Al Roker took to Twitter Saturday and informed his followers that he filed a complaint with the NYC Taxi and Limousine Commission after his latest experience with being passed by a taxi driver.

Filed a complaint today after getting passed up again by a NYC Yellow cab. Cabbie picked up a white guy a block away. Wonder why Uber wins?

While he doesn’t specify when the incident took place, Roker claims that a taxi driver initially stopped for him and his 13-year-old son—who was with him—to get into the car. When Roker reached for the door, the taxi driver took off and picked a white male customer a block away.

Roker notes that while most taxi drivers pick up passengers everyday without any issue, there are some racist taxi drivers who will discriminate against people of color. And he’s more upset that his son Nick had to experience it than by the actual act of the taxi driver passing him.

This happens to folks of color every day. And while most cabbies do their job, there are those ignorant, racist ones who hurt the others

What really hurts, my 13 yr. old boy was with me and asked why the cabbie passed us. I said, "Nick, ignorant people make dumb choices"

Now that he’s filed the complaint, he has to wait for it to be processed, but he promises to keep his followers updated.

Hopefully @nyctaxi weeds out the bad apples. Looking forward to a hearing and dealing with this. I will keep you posted

At the very least, the Taxi and Limousine Commission is now aware of the issue.

“Service refusal goes to the core of the taxi industry’s social contract with the riding public and it will not be tolerated,” Taxi and Limousine Commission chair Meera Joshi said in a statement to NY Daily News. “We’re grateful that Mr. Roker took the time to file a complaint, and I can assure him that we will investigate this thoroughly and take every appropriate action.”

According to the NYC Commission on Human Rights, it is against the law for public accommodations (which include taxis) to refuse service based on race, color, religion, gender, and other protected classes. If someone feels that he or she is being discriminated by a taxi driver, the NYC Commission on Human Rights advises riders to take the following action:

If a taxi driver refuses to pick you up or discriminates against you based on any of the protected classes under the Human Rights Law, you may file a complaint with the Commission on Human Rights and the Taxi and Limousine Commission by calling 311 or (212) NEW-YORK.
Note the cab’s medallion number, the driver’s name, license number, the date, location, and time. Also, ask for a receipt since it could support your complaint.