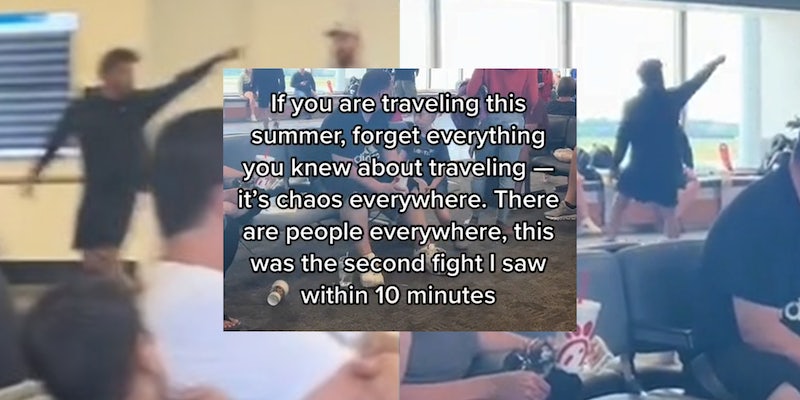 ‘Forget everything you knew about traveling’: TikToker claims they witnessed 2 fights at airport within 10 minutes

'It’s not going to get better anytime soon.'

A TikToker shows a fight that broke out at an airport in a now-viral video, sparking discussion about recent flight cancelations and delays.

In the video posted by TikToker Jillaine (@itsjillaine) on Thursday, she shows a clip of two people yelling at each other across the terminal. She uses popular TikTok audio, “I want to go home,” to soundtrack the clip.

“If you’re traveling this summer, forget everything you knew about traveling— it’s chaos everywhere,” the text overlay on the clip reads. “There are people everywhere, this is the second fight I saw within 10 minutes.”

@itsjillaine I think we’re all a bit cranky from the #travelchaos aren’t we? #traveltiktok #traveltips ♬ original sound – ESOSA||CONTENT CREATOR

The video has reached over 515,000 views as of Monday, with commenters pointing to the recent uptick in flight cancellations and delays as a possible source of tension among passengers.

As Jillaine wrote in the caption, “I think we’re all a bit cranky from the #travelchaos aren’t we?”

According to flight data from FlightAware, there have already been more cancellations in the first half of 2022 than there were in all of 2021. Forbes reports that these extreme delays are due to widespread pilot and airline staff shortages as travel ramps up during summer vacation.

“Airline workers are overwhelmed, and pilots and crews are exhausted. It’s not going to get better anytime soon,” one commenter wrote.

“I love traveling but I hate airports. I also saw a fight at the airport this summer,” another said.

“I regularly see advice to get to airports 3 to 4 hours early now,” a third added. “If I’m traveling less than 1 days drive away, I’m not flying.”

The Daily Dot reached out to Jillaine via TikTok comment.