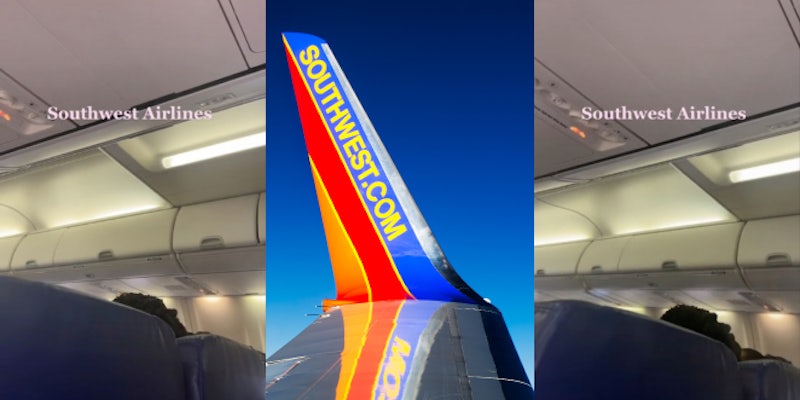 'People do realize kids can have iPhones too right.'

A viral video shows a Southwest Airlines pilot telling passengers that if they continue to AirDrop nude photos to each other, he will have to deplane them and get security involved.

Teighlor Marsalis captured the Southwest Airlines pilot’s announcement in a TikTok posted on Thursday. In the video, the pilot says that if passengers continue to AirDrop nude photos to other passengers while the plane is on the ground, he will “have to pull back into the gate, everybody’s going to have to get off. We’re going to have to get security involved.”

“Vacation is going to be ruined,” the pilot says over the plane’s intercom. “Whatever that AirDrop thing is, quit sending naked pictures, and let’s get yourselves to Cabo.”

This isn’t the first time a viral TikTok has shown someone AirDropping nude photos on a flight. A man was arrested in June for AirDropping photos of his genitals to random passengers on his flight.

The practice of AirDropping nudes to strangers, also known as “cyber flashing,” was almost outlawed in New York state in 2018. A current New York lawmaker is working to make sending unsolicited nude photos illegal through legislation in the state, as well.

Many commenters on Marsalis’ video enjoyed that the pilot was acting like a parent who threatens to “turn the car around” when their kids are acting up in the backseat.

“Don’t make me turn this plane around,” @jim_casey commented with a laughing emoji.

“This feels like my mom turning around in the car to me and my twin sister ‘IF YOU 2 DONT STOP I SWEAR TO GOD,'” @nikki.marie.photo wrote.

Others discussed the complexities and consequences of Airdropping photos to strangers.

“People do realize kids can have iPhones too right,” @b0010i89d commented.

“You take that risk accepting anything airdropped from strangers,” @captaincoronaman wrote.

“I can’t airdrop a picture to a member of my family 2 ft away,” @wterguynv commented. “But on a plane I sometimes get like 5 airdrop photos.”

The Daily Dot reached out to Marsalis and Southwest via email.