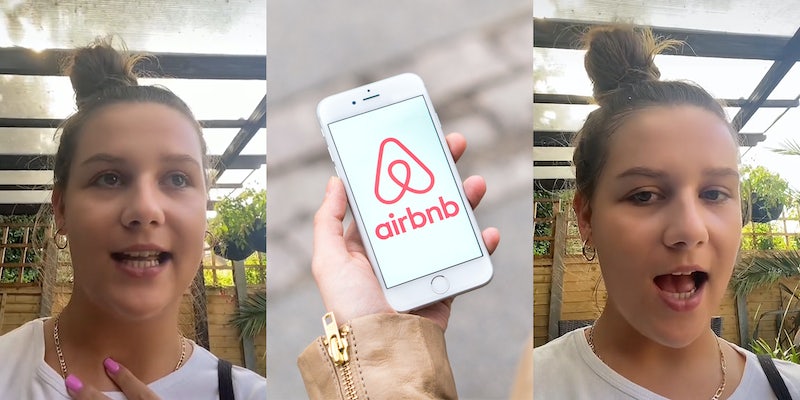 ‘Airbnb is responsible for their hosts at the end of the day’: TikToker says Airbnb left her and her mother stranded on the streets in the South of France

'[Airbnb] told me essentially to p*ss off and that it's not their problem.'

TikToker Emma Watkins (@emmaa.watkins14) shared why she is “never using Airbnb ever again” in a now-viral clip that delineates a “nightmare” series of events that ruined a vacation she had planned months in advance. She says she will never use the home-sharing company again after the way the brand handled the situation.

In the clip, she starts by describing just how ideal the location of the Airbnb was. Watkins says she and her mother, who are both from the U.K., booked the apartment in the South of France back in March 2022. However, when they arrived for their vacation in the summer, she says they realized the lovely apartment had one glaring safety issue.

“So we arrived at this apartment and we were greeted by someone who wasn’t the owner but was obviously employed by the owner to do the check-ins,” she says in the clip. “He was taking us around the apartment explaining everything to us and we got to the balcony door and he said, ‘this doesn’t lock it’s broken.’ And I tried to close it and it wouldn’t. It wasn’t that it wouldn’t just lock, the thing wouldn’t close.”

Watkins says despite the apartment being on the second floor, she was concerned since it faced a busy main road and the balcony wasn’t that high above the ground.

“So obviously we turned around and said, ‘we can’t stay here. It’s not safe,'” she says.

Watkins says they immediately got in contact with the owner in order to try and work something out.

Watkins claims the owner offered to contact Airbnb directly since he didn’t have any other available units. She adds that he didn’t seem to be making “an effort to fix the problem” as he couldn’t “guarantee” whether or not he would be able to get someone to come and fix the door.

Eventually, Watkins says an Airbnb support representative reached out to the TikToker through the mobile app and let her know that they’ve been communicating with the host. The support rep allegedly claimed the host told her that a “window is broken” but there are “other windows that serve the same purpose” and as a consolation, the company would “reduce the rate for” her.

Watkins says she explained that it wasn’t a window, but rather a balcony door that not only wouldn’t lock but wouldn’t close, making it unsafe for her and her mother to stay at the location.

In a follow-up clip, Watkins says that after not responding for a while, the employee claimed their shift was over and for Watkins to contact some other rep. The TikToker decided to fill out a complaint form on Airbnb’s app instead and flagged the listing as “unsafe.”

“Bearing in mind a significant portion of time has passed since we arrived and it’s getting dark, and we are two ladies in a foreign country without a safe roof over our heads,” Watkins says.

She says she finally connected to another Airbnb rep, who was purportedly extremely apologetic and said that he would work to find them “alternative accommodation.”

Once again, Watkins expressed her concerns that they will be unable to find a similar Airbnb within the same location, quality, and price point as the one they booked. The Airbnb rep then purportedly gave her a 30% “above value” coupon for a stay which would allow them to book something with the same quality of accommodations as the original booking.

The rep allegedly instructed the TikToker to look for some alternative places in the area and he would do the same while working on obtaining the 30% off coupon. She says she sent him “a couple of listings” but didn’t hear a response from the rep, nor did he follow up about the coupon or get back to her with any alternative listings either. She started to get the feeling that she was being ghosted, and wanted to ensure that the application would pay the difference for the listings she sent over to him.

After not hearing back, Watkins and her mom decided to book a hotel for the night while they waited on Airbnb’s response.

Apparently, the customer service rep did not provide any alternative listings and as for the “coupon,” the TikToker says she was “completely misled” about the value she would be receiving, as it was only good for 300 euros.

“Airbnb [is] responsible for their hosts at the end of the day,” she says in the last clip and couldn’t understand why the company didn’t work harder to rectify the situation.

In the end, the TikToker and her mother decided going back home was their only option as the coupon would not be enough for a week’s stay and every other decent place was too expensive.

“This was not what we had envisioned for our holiday,” Watkins says.

However, she says there were no flights available to the U.K. that day on top of Airbnb canceling their original reservation without notifying them. They ended up paying “extortionate” prices for flights back home because they were “so done with the situation.”

While she was refunded for the booking, Watkins says she felt she was entitled to reimbursement at the hotel and for her and her mother’s flight back home.

The TikToker says that her concern was passed around to “four or five” different people who basically told her “to piss off and that it’s not their problem.”

Responses to the TikToker’s videos were divided. Some folks said that they’ve never had a problem booking with the company before, while others encouraged her to take legal action to recoup some of her costs. Others said that while they stayed at Airbnb listings, their own places were broken into via the balcony, so Watkins was right to not stay there.

The Daily Dot has reached out to the creator via TikTok comment and Airbnb via email for further comment.