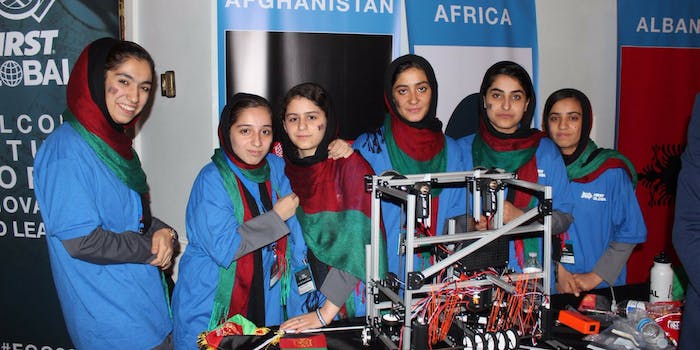 It's a victory for courage.

The team of Afghan girls who were twice denied U.S. visas to participate in the inaugural FIRST Global Challenge for robotics will be taking home a silver medal for their “courageous achievement” with their ball-collecting robot.

According to ABC News, the girls’ award recognizes teams with a “can-do” attitude under difficult circumstances, or when things don’t go as planned. South Sudan’s team won gold, while Oman’s team were awarded bronze. Teams from more than 160 nations competed in the event, with the event’s top awards going to the team with the most cumulative points over the course of the three-day competition.

Rodaba Noori repairing her robot showing that girls can do the same thing as men! #FGC2017 #AfghanRoboticsTeam #STEMGirls #womeninSTEM pic.twitter.com/G8S6deexB4

The team from Afghanistan arrived in the U.S. early Saturday morning after requiring the assistance of President Donald Trump to participate in the Washington, D.C., competition. Previously, the girls and their chaperone had risked their lives for their U.S. visas for short-term entry, traveling 500 miles across Afghanistan twice. They were denied both times.

As previously reported, Trump asked officials at the National Security Council for assistance, which granted the girls “parole,” a 10-day stay without a U.S. visa.

After their win, the girls’ team celebrated at a reception hosted by the U.S.-Afghan Women’s Council and the Afghan Embassy, met presidential adviser Ivanka Trump, and had their stories entered into the official Congressional Record by Democratic Sens. Jeanne Shaheen and Maggie Hassan of New Hampshire.

Incredibly honored to be at @Embassy_of_AFG welcoming the ALL girls #robotics team! Thank you @hmohib

Had the girls been unable to attend the competition in person, they were ready to livestream their participation from Afghanistan, a testament to their positivity in the face of adversity, indeed.