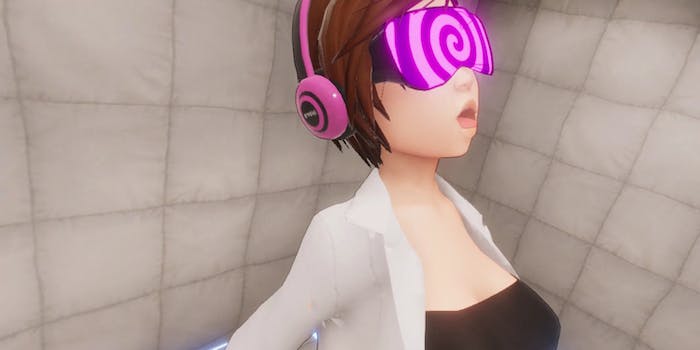 Games journalism is still ashamed of adult games. How do we fix it?

Changing the industry is a massive undertaking—but it's not impossible.

A year ago, the Daily Dot posed a difficult question to the games journalism world: Why do you all hate covering adult games?

“[G]ames have become both tremendously risk-averse and brutally neoliberal. They require a vast, heterogeneous player base to pay off their massive investment but are more intent than ever on accommodating their zealous orthodox wing,” Tucker wrote. “They attempt to be everything to everyone, while still maintaining their necessarily conservative core.”

Changing the games journalism world is a massive undertaking, but it’s possible to improve its relationship with the adult world. We’ve seen more and more journalists embrace 18+ games, too, particularly among newer, queerer, and sex worker-friendly writers. But how do we get the industry to change? As someone who spent the past year reporting on adult games, I’ve got some ideas.

Put the ‘are games art?’ debate to rest

Around a decade ago, games writers started intensely debating whether games are art or not. We’re still living in that shadow today. So, let me put this discourse to rest for the 125th time: Yes, games are art.

Just as interactive art exhibits are art, the weird little shooters and role-playing games we play after work are also art. They are reflections of human creativity instilled with narratives and aesthetic designs intended to incite emotions in players. Yes, that means Doom is art, as is The Witcher 3, but it also means Divi-Dead and Corruption of Champions are art, too. It’s not just games, but specifically adult games, that need to be read, analyzed, critiqued, and refined as an art form.

The sooner we stop treating games as children’s toys and start looking at them as a form of sociocultural expression, the sooner we’ll start fixing up the parts of the industry that hold back the adult creators and sex workers who make 18+ games.

Most of the mainstream games media sees sex in games as a weird curiosity that’s worth either gawking at, making fun of, or musing on as a larger commentary of sexual degeneracy on the internet. But the adult industry is an industry. It’s filled with corporate politics, workplace drama, layoffs, crunch, quarterly taxes, and clashing personalities. After a while, anime titties take a backseat to questions about work hours, overdue invoices, and artists’ creative compatibility.

Underneath every adult game is a mixture of narrative themes and gameplay mechanics that carry a lot of cultural baggage about sex, race, gender, consent, and pleasure. This isn’t a new topic in 2020—it’s been popularly referenced and examined in games criticism since the early 2010s—but the idea itself is still lost on a lot of games developers and writers.

Celebrate adult games creators, and take risks to cover them

Games are an art form, and adult creators that make 18+ games are taking a lot of risks to make them. So why aren’t we telling their stories, previewing their creative vision, and encouraging players to check out their hard work? Games journalists regularly preview upcoming mainstream games and indie titles that catch their eye, but for some reason, porn games aren’t considered artistic enough to earn that same honor. The few examples are the exceptions that prove the rule and are usually covered because an explicit creator was already well connected in the industry because of their non-explicit work, such as Christine Love’s Ladykiller in a Bind or, to be blunt, myself. (Just check out all the blurbs I got on my Twine game.)

To be clear, fixing the larger online editorial industry is at the center of this issue. When Google controls how your content is seen, and Patreon dictates what sort of porn you can discuss, that causes a chilling effect on adult speech. But nothing is going to change until writers and editors come together and start pushing the boundaries of what their advertisers will allow. If you put up a fight, you’ll see where the line is and learn how to push back against it. And if the higher-ups publishing your work aren’t thrilled, that’s not an invitation to give up; it’s an urgent warning to push back.

Update 5:27pm CT, Aug. 14: Steam moderators on Friday shut down a second forum that contained transphobic remarks in relation to a slur included in Corruption of Champions 2.