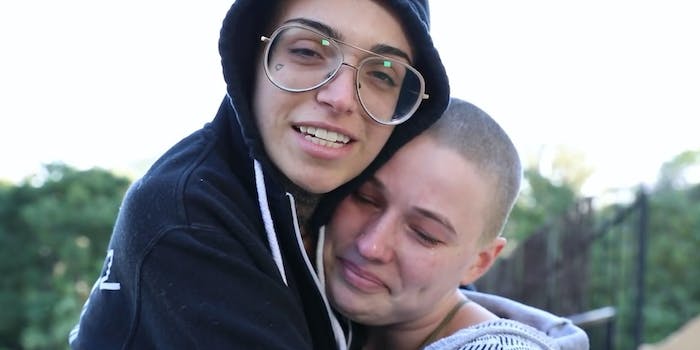 The two women claim they were misled and abused by both an actor and a director.

While Me Too has highlighted Hollywood’s problem with sexual harassment and assault, stars in the adult film industry would like to bring attention the problems of abuse they struggle with, too. In a lengthy YouTube video posted on Friday, two adult film actresses have come forward with assault allegations on a set possibly linked to the website Facial Abuse.

Actresses Leigh Raven and Riley Nixon said that male talent Rico Strong sexually assaulted them while working with a director named “Just Dave” on separate occasions. In the video, both shared similar stories, detailing misleading shoots in which Raven and Nixon were brought onto sets and physically abused beyond the limits they originally consented to for their performances.

In the video, Raven said Strong brought her on for a “kinda rough” shoot with demeaning race play elements geared around Strong being Black and Raven being white. Raven agreed to the shoot, seeing Strong as a friend of hers.

She then said the crew forced her to throw up on camera by eating a bag of apples, after which she says she was exposed to ongoing rough oral sex that she did not consent to performing. She also alleged that Strong purposefully penetrated her vagina in a way that was painful to her shallow cervix, a condition she disclosed before the shoot began. She said a medical evaluation led to her being diagnosed with a vaginal tear and a bruised cervix from the sheer abuse brought on by the scene.

“I trusted my friend Rico. My friend Rico was the one who asked if I could come to set and fill in that day and I had no reason not to trust him,” Raven said in the video. “He had done a scene with my wife and she had nothing but great things to say about him. So I trusted that.”

Meanwhile, in the video, Nixon opened up about an interracial “rough” and “throat play” scene from January with Strong and Just Dave. Immediately, Nixon found it somewhat concerning that the shoot would feature puking, but she agreed to the scene regardless.

However, on set, Nixon said that Strong slapped her extremely hard multiple times, beyond her limits. She also said Strong choked her improperly, to the point of cutting her breathing and preventing her from talking or calling for the scene to stop.

Alongside Strong’s physically abusive behavior, Nixon also said the scene led to her being forced to vomit from extremely rough oral sex. The scene ended with an incredibly rough and “painful” sex scene, which was beyond the limits that her body could physically handle.

“I love rough sex. It wasn’t consensually rough,” Nixon explains in the video, tearing up and shaking her head. “I mean, yes, I was consenting to it, but it was way rougher than it needed to be.”

Both Strong and Just Dave have denied the accusations, with Strong turning to Instagram to say he would never “do anything to hurt a woman on or off set or push past her pleasurable boundaries without consent.” Just Dave, meanwhile, told Jezebel that he has six hours of footage that “does not match what [Raven] is claiming.” He plans to hand that footage over to police and perhaps release it publicly. Raven, meanwhile, is taking time off from shoots for her mental health, according to a tweet from earlier today.