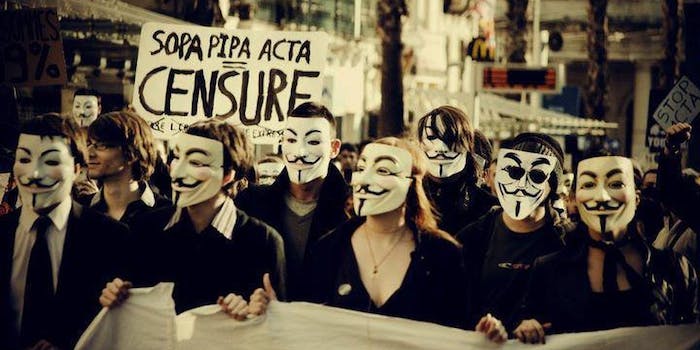 From Berlin, to Boston, to Sendai, Japan, thousands will gather to protest ACTA on June 9.

The last time millions of people protested in unison for the Internet—in January, against the Stop Online Piracy and Protect IP Acts (SOPA and PIPA)—it was entirely online, from the comfort of people’s homes.

On Saturday, things will be different. Residents of a whopping 122 cities are massing in defense of a free Internet—likely be the largest physical protest for the Internet in history, by a large margin.

The protest is focused in Europe, where activists’ immediate concern is the Anti-Counterfeiting Trade Agreement (ACTA), a far-reaching pact between much of the developed world that would, according to critics, give governments invasive spying power to make sure citizens don’t violate intellectual property laws.

The European Union, which helped draft ACTA, will vote on whether to sign the agreement in July. A rejection from the EU “would mean that ACTA is dead, at least politically,” Ot van Daalen, a representative for the Dutch digital advocacy group Bits of Freedom, told the Daily Dot.

It’s anyone’s guess how large these protests will be, since no single group is organizing them. A Google Map has chronicled most (but not all) of the protests, coupled with Facebook events for each.

But even using those, it’s hard to estimate participants. Quimper, France (population 65,000) has such a protest page, as does Stockholm, London, Berlin and nearly every capital city in the European Union.

And it’s a truly global protest, too, despite the ostensible focus on Europe. New York, Boston, Quebec City, and Sendai, Japan, to name a few, are also hosting gatherings. The U.S., Canada, and Japan have all signed ACTA, though it won’t be ratified without the EU’s signature.

The international activists are using the ACTA protests to promote their own domestic agendas, too. Those in New York are gathering in Liberty Square—the common site for Occupy Wall Street—cite their enemies as not just ACTA, but SOPA, PIPA, the Cyber Intelligence Security Protection Act (CISPA), as well as a number of other acronyms, and ignored multiple requests for comments.

Boston, on the other hand, is capitalizing on the date—it’s the same as the city’s Pride Day Parade. The Massachusetts Pirate Party is marching in celebration of Bradley Manning, the gay American soldier who allegedly gave classified information to Wikileaks.

Despite all the unknowns, Saturday. The sheer number of cities where people have pledged to show would ensure that.

The anti-ACTA movement has seen a string of victories in the EU recently. Nevertheless, if the EU parliament does strike ACTA down in July, it’ll be hard to not see June 9 as a major reason why.