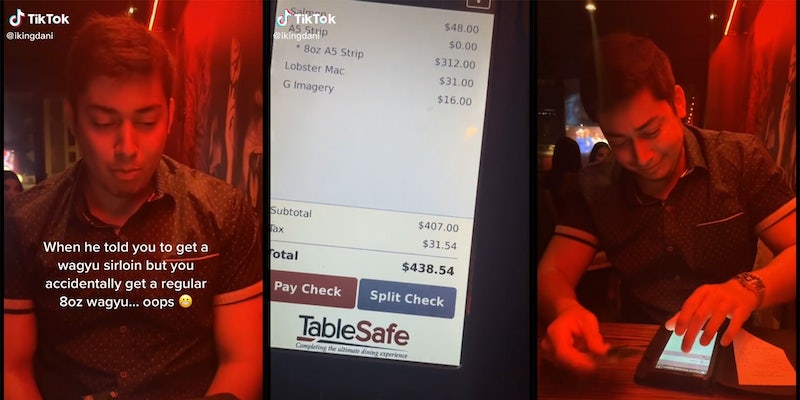 ‘Tell me you are least offered to pay for it’: Woman accidentally orders $300 steak on date, sparking debate

Anniversary dinners don’t always go according to plan. Sometimes, the food isn’t as good as expected; other times, the service doesn’t meet the standards of the occasion. And sometimes, like in the case of TikTok user Daniela (@ikingdani), you accidentally order a $300 steak.

In a video with over 2 million views, Daniela shares a video that she says is from her 2-year anniversary dinner. According to Daniela, her partner encouraged her to get the wagyu sirloin, which she did—or so she thought. Rather than get the sirloin, Daniela says she accidentally ordered the 8-ounce wagyu, bringing her meal’s total up to over $300.

The video shows Daniela’s partner jokingly shaking as he inserts his card to pay for the meals, which came out to $438.54.

In the comments section, Daniela explains that it was an innocent mistake she felt bad about and that her partner was completely understanding.

“I walked out the restaurant crying…” she wrote. She later added, “he [held] my hand while I was tearing up and told me we were going to laugh about it in a couple of months.”

“It was the 8 slices of wagyu and some tiny leaves on the side with salt,” she wrote in a comment. “Trust me it wasn’t even good.”

“I did this on my first anniversary,” another shared. “It was so good my husband lets me get it every year.”

Other TikTokers thought the server should have clarified the price before accepting the order.

“Waiter definitely should have read the order back and confirmed that’s what they wanted tbh. if something like that is offered,” a commenter suggested.

“I’ve been a server and I would have verified in a nonchalant way,” a second claimed. “‘I just want to confirm you want the 8oz waygu that’s listed on page xyz.’”

“Nah cause the server should [have] clarified that,” a third stated. “something that [different] in price I would [have] been like ‘okay and just to let you know it’s $300.’”

“The server should’ve confirmed that’s what you meant to order given the disparity in the dishes,” a fourth agreed.

Even more users voiced their opinion that Daniela should be responsible for at least some of the bill.

“You should’ve offered to pay half. That’s a big bill,” a user wrote.

“So you paid for half right?” asked another.

Still, Daniela and her partner seemed to have handled the situation with good humor, and even found ways to make it back up to him.

When one user wrote, “you better have bought that man a PS5,” Daniela simply responded: “I did.”

We’ve reached out to Daniela via Instagram direct message.