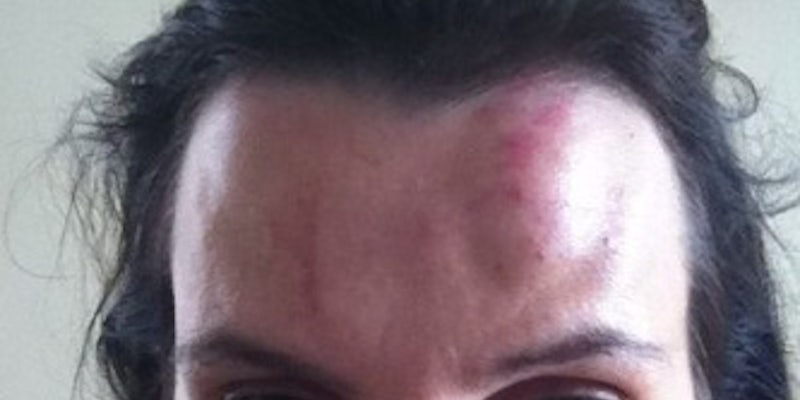 A woman claiming to be the American wife of a wealthy Chinese businessman has taken to China’s Twitter to air allegations that her husband savagely beat her.

The woman, Kim Lee, posted a photograph to the Sina Weibo service last Wednesday that shows golf-ball sized welt her forehead. Throughout the week she continued posting photographs, including one of her bruised knees and another of a bloodied ear.

“Seeing that you were having make up applied for TV appearance while I was in hospital hurts more than your slamming my head on the floor,” Lee wrote.

These are serious allegations of domestic violence against a celebrity businessman and educator — all played out on China’s largest public and social media forum. It’s another indicator of the power of social media to quickly spread allegations of misdeeds, no matter where you are in the world.

In Li Yang’s private schools and his numerous educational books, students are encouraged to shout at the top of their lungs to master pronunciation and memorize vocabulary, a major divergence from more traditional language learning in China. Li Yang claims that approximately 20 million people have attended at least one of his company’s English lectures.

Li Yang himself maintains a commanding stage presence, where his mix of self-deprecating humor, ardent nationalism, and motivational speaking serves up a frenzied audience — so frenzied, in fact, that some Chinese intellectuals have compared them to cult gatherings.

As China blog The Shanghaiist observes:

“Li Yang fills his Crazy English sessions with a heady brew of nationalism (the company’s slogan is “Conquer English to Make China Stronger!”) and motivational mumbo-jumbo (students are often made to yell “I can totally conquer English! I am no longer a slave to English! I am its master!”).”

Li Yang and Kim Lee, originally from Florida, met in 1999 and married four years later in Las Vegas. They have three daughters.

Kim Lee’s posts, which alternate between Chinese and English, have received thousands of responses and reshares on Sina Weibo.

“I believe you,” wrote Weibo user highdior, in English. “Hope that man could also learn a lesson otherwise it is a tragedy of our society since he is the idol of many of our kids.”

After Kim Lee first aired her allegations on Wednesday, mainstream Chinese media picked it up, including 163.com, iFeng.com, and Sohu.com.

Kim Lee continued to write as of this evening in China.

“My back is weak after having kids,” Lee wrote. “You weigh much more than me. Lydia screamed and scratched your arm to get you to stop. When you did, I got up, grabbed our passports, grabbed her and ran to the police station.”

Li Yang has not responded to the allegations. Domestic violence is illegal in China under a 2005 revision of the country’s Marriage Law, according to the Global Times.

Sina Weibo, a service that mixes many of the features of Twitter and Facebook, is the most popular micro blogging Web site in China, with about 140 million users, or 56 percent of the market share.