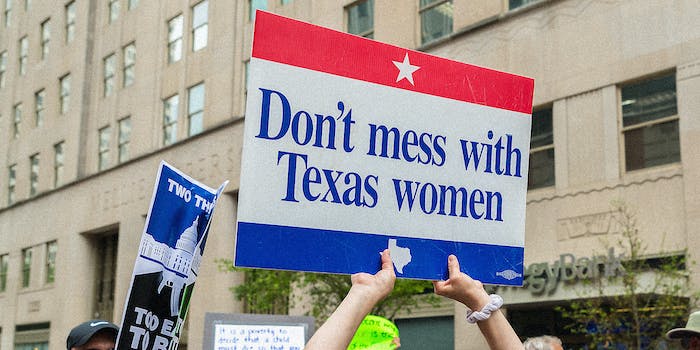 An anti-abortion website in Texas that is calling for people to send anonymous tips about people accessing and assisting abortions has banned at least one pro-choice user from the website for submitting a fake tip.

Nancy Cárdenas Peña, a Texas director for the National Latina Institute for Reproductive Justice, told the Daily Dot that she was banned from the website after she tweeted about it.

Peña tweeted a link to the website with a sarcastic message about what it would mean for the website to be spammed with messages that “abused” the system.

“Gosh, I wonder if they factored in people abusing the integrity of this system. Hmmm I hope ppl don’t abuse this! That would be terrible,” she wrote in a tweet on Friday.

The website, prolifewhistleblower.com, has a form for sending anonymous tips to report the violation of a recently enforced law that punishes anyone in Texas who has undergone an abortion or assisted in one after the first six weeks of pregnancy.

The measure, which was signed into law in May and will go into effect in September, rewards a person a minimum of $10,000 for suing any person involved in an abortion, including health professionals, abortion centers, family members, or those involved in rape crisis counseling, the Texas Tribune reported in May.

The website for whistleblowers seems to take the law one step further by allowing anyone and everyone to send in an anonymous tip.

“If you want to help enforce the Texas Heartbeat Act anonymously, or have a tip on how you think the law has been violated, fill out the form below,” reads a description on the website, which is limited in the information it provides. It only gives the users the option to send an anonymous tip or request more information about joining the movement to “enforce the law and hold the abortion industry accountable.”

The anonymous tip form allows for people to share “attachments of evidence” of the violation. Pro-choice advocates like Peña are making full use of it.

“It really would be a shame if people used a VPN to submit bullshit tips to this bs hotline,” Imani Gandy, a lawyer-turned-journalist, wrote cheekily. Many shared screenshots of the “reports” they sent in with this feature, which were sarcastic comments or memes.

One redditor shared the rant that they allegedly wrote on the form. “Thank goodness you are here. Today I was walking down my street in the Dallas suburb of Christiantian, and I saw SEVERAL women who were not visibly pregnant,” they wrote. “I cannot say for certain that they have had abortions, but why are they not pregnant if they are of childbearing age? Clearly there are abortions afoot. Please investigate these womens!!!!”

Another redditor said that they reported the wife of one of the website’s founders on the tip form. “What if we just start reporting all the unvaccinated,” one Twitter user wrote.

The domain owners did not respond to the Daily Dot’s request for comments when contacted through the form (no contact information was available on the website). But they did seemingly react to the influx of these messages by blocking people’s IP addresses from submitting tips the website.

“It seems the site has blocked IP addresses of users not only in Texas, but the entire country,” Peña told the Daily Dot on Monday, adding that the law allows anyone in the country to file a lawsuit against those participating in an abortion. “No reason was given for being blocked from these efforts.”

Beyond her sarcastic commentary and humerus way of fighting the new law, Peña shared her concerns about how deep this issue can go.

“We see this in Texas but it’s only a matter of time before other states adopt similar measures to criminalize not only safe abortion care, but advocates who continuously work to ensure that access is preserved,” Peña told the Daily Dot. “It’s not a matter of ‘if’ it’s a matter of ‘when,’ and it’s incredibly important for us to continue in solidarity to ensure our access to safe abortion care is maintained and preserved.”