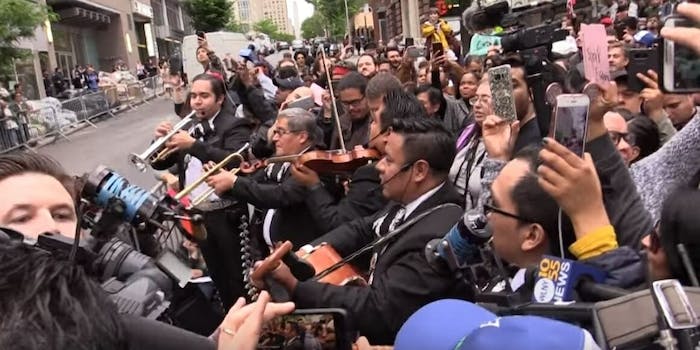 There was joy. And anger.

The man who went on a racist tirade at a New York City eatery this week is probably feeling the intense media spotlight more than he ever thought possible.

Aaron Schlossberg went viral this week when he was caught on video lambasting people who were speaking Spanish at a Fresh Kitchen restaurant and threatening to call immigration services to get them deported.

After a GoFundMe raised more than $1,000 to send a taco truck and a mariachi band to his apartment, hundreds of people gathered outside his home on Friday to serenade him. According to the New York Daily News, more than 500 people showed up at his apartment. Some sang with joy, and some, frankly, were pissed.

“This is New York. How dare you come here and tell people not to speak Spanish?” 30-year-old Aniana Gerardo told the newspaper. “This is a boiling pot of immigrants. You have to be accountable for what you do.”

This message is for #AaronSchlossberg Signed, the people of NYC pic.twitter.com/7YdpcHeWXz

Cops keep the peace as the Mariachi band serenades the bad flavor of the week Aaron Schlossberg, who probably wishes he didn't say anything. pic.twitter.com/mDbrMiAHul

Schlossberg’s rant was caught on camera this week, and it immediately went viral.

“Your clients and your staff are speaking Spanish to staff when they should be speaking English…” Schlossberg told the restaurant manager. “My guess is they’re undocumented, so my next call is to ICE to have each one of them taken out of my country. If they have the balls to come here and live off my money—I pay for their welfare. I pay for their ability to be here.”

Later that week, he hid his face in an umbrella when he was approached by the media, and he was caught on video sprinting away from another reporter. He’s also been shown on video along with other Donald Trump supporters yelling at Jews with whom he disagrees.

Oh, Aaron Schlossberg, it must be awful to be accosted by a stranger when you're just trying to work and go about your day. pic.twitter.com/tndpgYB6VC

Meanwhile, Schlossberg has been barred from his Madison Avenue office. A crowdfunding account called “Mariachis for Aaron Schlossberg,” with an initial goal of $500, was created to introduce some Mexican culture into Schlossberg’s life. More than $1,000 was ultimately raised.

From the videos above, it looks like that money was put to good use.